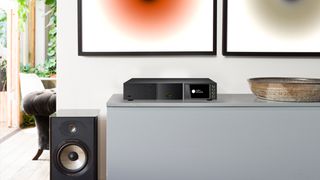 Today is a good day for Naim network streamer owners. The British hi-fi brand has announced it is updating its network players with Apple AirPlay 2 via a free over-the-air update.

Courtesy of the new functionality, owners of the five-star ND 555, five-star NDX 2 and Award-winning ND5 XS 2 will be able to stream music directly from their Apple device – whether that be an iPhone, iPad, iPod, Mac or Apple TV – to the streamer with just a couple of button presses.

The update brings Naim's streaming separates in line with its Mu-so wireless speakers and high-end Uniti range, and will arrive in the form of an update prompt on Apple devices with iOS 11.4 or later versions – so keep those eyes peeled.

That update also brings Siri onboard, allowing owners to control the playback of  the likes of Apple Music, Spotify, Tidal, internet radio and podcasts through voice commands. AirPlay 2 also bring multi-room functionality to the table, allowing the streamers to work alongside other AirPlay 2-compatible devices.

Of course, Apple AirPlay 2 only expands what is already a wide gamut of wireless potential, with the network players already Roon Ready and supporting Bluetooth, Spotify Connect, Chromecast and music services like Deezer and Qobuz. They can also handle hi-res music; WAV, FLAC and DSD files at up to 32-bit/384kHz are supported.

Apple AirPlay 2: features, speakers and how to use Apple's streaming tech