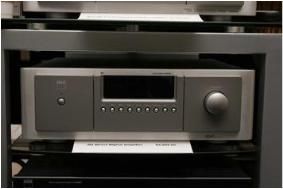 Greg Stidsen, NAD's director of product development, insists the M2 is "revolutionary", saying it's "Class D amplfiication that has both the measured and subjective performance to raise the bar compared to existing Class A and AB amps".

The 250W-per-channel M2, which fits into NAD's Master Series, is the result of a decade-long NAD research project and three years of 'intense development', including collaboration with UK-based semiconductor specialist, Diodes Zetex, on what's claimed to be unique digital amplification architecture.

NAD's claims continue: "Superior to any previous digital amplifier, the M2 can be thought of as a Digital-to-Analogue Converter (DAC) that directly drivesa loudspeaker, but with the same precision as the very best low-level DACs."

DDFA – co-developed with Diodes Zetex – claims to avoid the limitations of conventional error-correction or 'feedback' approaches used to achieve very-low distortion. How? By generating a feedback signal through comparison with an extremely pure reference, then converting the signal to the digital domain at an 108MHz sample rate before using it for correction.

DDFA simply determines the pulse area error, regardless of its cause, and passes the information to the digital domain for compensation. The result, NAD claims, is "unmeasurably low" levels of jitter.

Other features include switchable Digital Soft Clipping, three power supplies, and an RS-232 serial interface that enables the M2 to be controlled by either a computer or a Crestron-style system.

Enough technology - how does it sound?

With so many features packed into the product – and superlatives packed into the press conference here at Munich – we can't wait to test the M2, which we hope to do for the Temptations section of What Hi-fi? Sound and Vision before the summer is out.