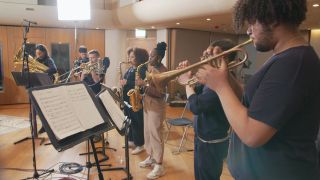 Picture this: you’re at a studio recording of your favourite artist. Your ears tune into every instrument and every word. As every sound reaches you, microseconds apart, your hearing is so sensitive to its directivity that your brain can pinpoint it and build a three-dimensional audio picture. It’s why live music feels so powerful and emotive, and why recorded music often doesn’t quite match that live experience.

So what if that same quality could be experienced at home or on the go?

MQA is the first technology to deliver all the crucial information in an original master recording from the studio all the way to your ears. To transport you to the artist’s original performance, so you can hear everything the artist and engineer created.

MQA stands for ‘Master Quality Authenticated’ – and its gift is in the name. It guarantees that every song or album encoded in MQA is the definitive master recording straight from the studio, in the highest quality and in the highest bitrate available.

While traditional encoding discards details and compresses music, MQA retains every element of the recording and ‘folds’ it all into a neat package that cleverly makes a large, high-resolution file manageable and compatible with any service or playback device. MQA calls this folding process Music Origami.

MQA can be played everywhere – whether on a mobile or portable music player, in your car, or through a laptop or a home hi-fi system; whether you are streaming or downloading music, or even playing a CD. Wherever there is sound, MQA delivers the best version of it.

MQA’s backward compatibility makes it playable on any music device, but you can get even more from MQA music using an MQA decoder. A hi-fi product from the likes of Mark Levinson, NAD, Pro-Ject or Technics; or a smartphone or portable player from brands such as Astell&Kern, LG or Sony, all contain MQA decoding capability to fully ‘unfold’ MQA music and reveal the original master resolution in all its glory.

MQA decoders also live in desktop and mobile apps from streaming services such as Tidal and China’s Xiami Music – authenticating the MQA file, assuring provenance, and capable of revealing higher-than-CD quality. In this instance, the final ‘unfold’ can be completed by an MQA renderer to deliver the maximum possible sound quality. Current renderer products that can pair with the MQA decoder include AudioQuest’s DragonFly range, Zorloo’s Ztella portable DAC and a range of products from iFi audio.

MQA’s award-winning technology is not only embedded in millions of devices worldwide, it’s also supported by the record label community. Sony Music, Warner Music and Universal Music are all MQA partners, as is Merlin on behalf of independent record labels, ensuring the biggest music catalogues can be made available in MQA. Supporting music services span Tidal, Xiami Music (China), nugs.net, and e-onkyo music (Japan) – and that list will only grow.

MQA is certified by the Recording Industry Association of America (RIAA) as an approved technology for hi-res music streaming. And even in the Recording Academy (Grammy) guidelines for high-resolution music production, MQA is acknowledged for gaining support from many of the most highly respected members of the professional audio community.

MQA’s commitment doesn’t stop at recorded music. The technology is the bedrock of The Master Sessions, an exclusive live-streamed concert event series in partnership with Bluesound and curated by tastemakers Jazz re:freshed and British Underground. Each concert is streamed in real-time, using MQA technology, to Bluesound MQA-enabled audio players to audiences in showrooms across the brand’s global dealership network.

MQA audio also goes hand-in-hand with HD video, with WOWOW – Japan’s premium pay TV broadcaster – harnessing the technology to partner its HD video playback with the highest quality sound. Most recently, MQA within video showcased the live performances of UK bands who were due to perform at the cancelled SXSW music festival.

MQA is uniquely built on three pillars: quality, authentication and convenience. Its fully end-to-end solution delivers the original recording, in the highest quality, directly from the studio master, in a convenient, efficient way, while authenticating the provenance of an artist’s work.

Whichever music genre you love, MQA brings you closer to the original performance. Which leaves one question: why endure a mainstream diet of MP3 quality when you don’t have to?