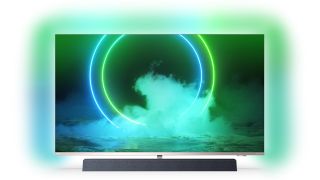 Dutch television brand Philips is continuing its partnership with British hi-fi stalwart Bowers & Wilkins into 2020, with the announcement of two new TVs with integrated B&W sound systems. And one of the new TVs is a compact, 43in model.

But let's start with the bigger, 9435 model that you can see pictured above. This is an LCD model with a direct LED backlight (Philips refers to this as 'DLED') that will be available in 55in and 65in variants. Dolby Vision and HDR10+ are both on board, and the set if powered by Philips's existing P5 Perfect Picture Processing Engine.

The B&W sound system is more or less a soundbar that also acts as the TV's pedestal stand. It features a 2.1.2 driver arrangement, with that final '.2' referring to two upward-firing speakers that, combined with the set's Dolby Atmos compatibility, should create a genuine degree of height in the sound field.

The aforementioned 43in model with B&W sound is the 9235. The speaker-pedestal here is much squatter than that of the 9435 and doesn't feature the upward firing drivers, but its 2.1 arrangement (which is rated to 40W) could (and probably should) be a vast improvement on the sound systems of most TVs of a similar size.

On the picture front, this smaller model swaps the direct LED backlight of the 9435 for an edge LED arrangement (which Philips refers to as 'ELED'), but the under-the-skin tech is otherwise the same, from the P5 Perfect Picture Processing Engine to the broad HDR support.

Pricing and availability for the 9435 and 9235 has yet to be revealed, although they are part of Philips's schedule for the first half of 2020 so should be expected by June at the latest.