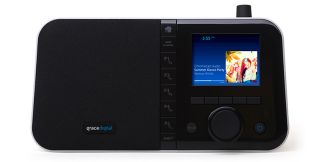 The Grace Digital Mondo+ is the first internet radio to come with Google's Chromecast streaming tech built-in as standard. That means not only can you stream to it without the need for a Chromecast Audio dongle, you can also control it just by speaking to a Google Home speaker.

You can stream all manner of audio content to it, from music stored on your phone to podcasts, as well as music from streaming services such as Spotify, Google Play Music, YouTube, Pandora, and any others that are Chromecast-enabled.

More than 30,000 free radio stations come as part of the package, too. These include CBS radio, iHeartRadio's portfolio of stations, NPR, BBC, Fox and more. You'll note the US angle, as the Mondo+ has been launched in the US.

MORE: What is Google Chromecast? What speakers and TVs are supported?

You'll be able to navigate these stations using the 3.5in full colour display, which also displays album artwork while a song is playing.

It can connect to most stereo systems, Macs, PCs, MP3 players and more, plus there's a headphone jack, and support for playing music from a USB drive.

Bluetooth comes as standard, giving you another way to wirelessly send tunes to it.

Inside is a Class D amplifier, and it's portable, so you can take it with you to the park. With 12 hours of playback before requiring a recharge, it should last for all but the most epic of picnics.