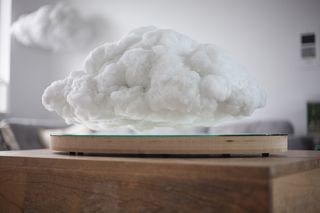 We've seen floating Bluetooth speakers before. In fact, we've seen two of them. But the Making Weather project is aiming for something a little softer: a magnetic, levitating speaker shaped like a cloud (specifically, a cumulus cloud).

The project is a collaboration between Crealev, which makes levitating speakers, and Richard Clarkson Studio, which has made a cloud-shaped lamp.

On the technical side, the base contains a lithium ion battery that needs to be plugged in to keep the cloud afloat. The cloud itself has sound reactive LEDs which light up when listening to music.

No price or release date has yet been announced for Making Weather, but we expect it to go down a storm.

You can see more about the Making Weather speaker in this video.