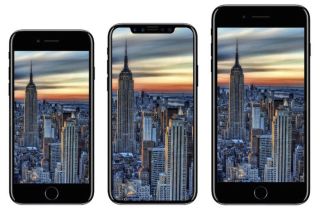 A version of iOS 11 - the operating system that runs iPhones and iPads - has been leaked to 9to5Mac and MacRumors, and with it comes more details of Apple's newest iPhone - including the name of its 10-year-anniversary phone.

Alongside an iPhone 8 and 8 Plus, the code refers to an "iPhone X". There's also information about Apple's new Face ID feature, which lets you unlock your phone and make purchases using its camera, and the widely trailed move to ditch the home button in favour of a full-screen experience on this OLED iPhone.

There is also an update to the company's wireless headphones, the Airpods. This appears to be far from a new edition of the headphones - rather it seems the charging indicator has been moved from the inside of the case to the outside.

There's also a rendering of a new Apple Watch with LTE functionality, allowing it to make and receive phone calls independently of your smartphone (although it shares the same number).

This isn't the first major leak that Apple has suffered before the release of its flagship phone: in the test code for its Homepod AI speaker - Apple's rival to the Amazon Echo - there were the first images of the bezel-free iPhone 8, as well as information about 4K and HDR in tvOS for a new Apple TV. Developer Steven Stroughton-Smith recently found (and tweeted) confirmation that the Apple TV's 4K streaming will require internet speeds of 15Mbps, too.

However, while that leak seems to have been a mistake on Apple's part, it seems this one is the work of a rogue employee. According to the BBC, it has "independently confirmed an anonymous source provided the publications with links to iOS 11's golden master (GM) code that downloaded the software from Apple's own computer servers."

Apple's launch is set for tomorrow (September 12th) and we'll be covering the event live for any new, as-yet-unleaked information.

What is OLED? The tech, the benefits, the best OLED TVs