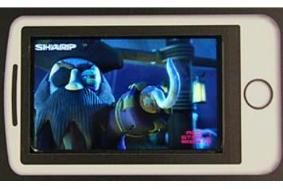 It appears to be targeting portable games consoles and other mobile devices, with sources close to the company suggesting it could find its way into Nintendo's forthcoming 3D version of the DS, expected to be called the 3DS. Sharp already supplies screens for the existing DS models, along with Hitachi.

'We are almost at the point of seeing 3-D images on mobile devices," said Yoshisuke Hasegawa, in charge of the Sharp's LCD operations. In fact, Hitachi already has such displays on mobile phones in Japan, having announced its Wooo H001 model a year ago, but the Sharp display is both larger and brighter.

It works by using a material with vertical slits to control the path of light reaching the left and right eyes, thus creating the illusion of depth. As yet the technology isn't suitable for large-screen displays, as it has a maximum viewing distance of around 30cm.