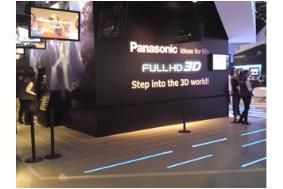 The set, which has been developed from the 103in screen demonstration the company showed last year, will be seen at CEATEC Japan 2009, which opens next Tuesday just outside Tokyo.

It sees the company bringing high-definition 3D down from large-scale show demonstrations to screen sizes likely to be more acceptable in the domestic environment.

See our blogs channel for more information on the technology behind the new TV.