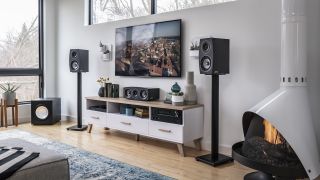 Having given its long-standing Studio 8 speaker range an update last year, Jamo is now turning its attention to its Concert 9 series.

Those HCCC drivers boast a stiff-compliant-stiff (SCS) sandwich construction that apparently results in a performance that's clean, clear and resonance-free, even when the speakers are being driven hard, while the silk dome tweeter is said to be crisp without sounding harsh and, thanks to an Anti-Diffraction WaveGuide, less restricted to a sweet spot than many speakers.

Jamo has also clearly put a lot of thought into how the Concert 9 II Series speakers look, with magnetic grilles, satin painted MDF baffles with a rounded finish, polished chrome logos and cast metal stabiliser feet all featuring. The standard finish is furniture-grade, scratch-resistant Black Ash, but if you're quick you can alternatively specify a limited-edition White Oak version.