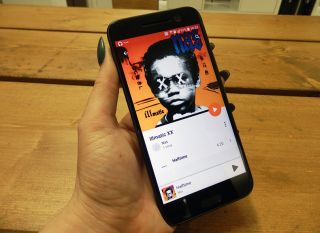 Compared to HTC's previous flagship phone, the One M9, the new 10 features a bigger 5.2in display which now boasts Quad HD (2560 x 1440 pixels) resolution. It's fitted in a brand new unibody design.

HTC has put a huge emphasis on the audio performance of its latest handset. Its BoomSound speaker design has had a significant tweak, with tweeter and woofer now positioned at the top and bottom of the phone for improved audio quality.

HTC has also introduced a new Personal Audio Profile system, which uses different test tones to create an audio performance tuned specifically for your audio preferences. You even get a pair of hi-res-certified headphones packaged with the phone so you can take advantage of its compatibility with high-resolution audio files.

The HTC10 also sports improved cameras compared to the previous One M9, with a 12MP design on the front and a 5MP on the rear, both of which feature optical image stabilisation.

The phone comes in two storage variants, 32GB or 62GB, but you can always expand the memory via a microSD card.

At its heart lies a Qualcomm Snapdragon 820 quad-core processor and 3000mAh battery which HTC claims can offer up to 27 hours talk time. With Quick Charge 3.0, HTC claims you can achieve a 50 per cent charge in 30 minutes.