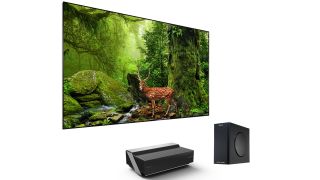 Unlike an age-concerned birthday boy on his 50th, Hisense is celebrating its half-century anniversary this year with a spring in its step - supposedly off the back of a successful 2018. The Chinese TV brand had its biggest year of sales, hitting a milestone of 20 million sets worldwide. It's just finalised an agreement to be a partner of Euro 2020, too.

While LG, Sony and Panasonic root for OLED, and Samsung has QLED, Hisense has for the last few years pedalled ULED and 'Laser' TVs - both of which featured heavily in Hisense's 2019 CES press conference today.

For the uninitiated, the latter, which made its way into the world in 2014, isn't your average TV, but instead a laser projection system beaming to an anti-reflective optical screen.

It's also 100in (Hisense is currently working to produce a 150in and 70in Laser TV) and features a 100-watt Harman Kardon 100 watts sound solution.

In addition to a TV tuner, the TriChroma Laser TV utilises the CIDA smart platform to offer a range of apps.

Hisense began its press conference by stressing the importance of a TV's content delivery, which turned out to be an ideal set-up for its next-gen 2019 ULED TV range, which will include models based on either the Android and Roku smart TV platforms.

The new models – all available by the summer – peak at the 75in U9F ($3500), which is capable of a 2200-nit brightness, has 1000 local dimming zones, supports Dolby Vision, HDR10, and features Harman Kardon sound and Amazon Alexa and Google Assistant voice control.