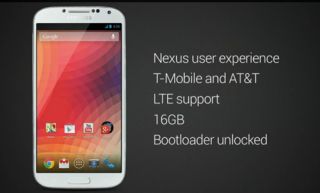 Google will release its own version of the Samsung Galaxy S4 with a stock Android OS, bringing the Nexus experience to the Galaxy S4.

The "Google Galaxy S4" is due for release on June 26th and will be available to buy via Google Play for a cool $649.

Google says the move will bring the "Nexus user experience" to th S4 and give users the chance to enjoy the purest form of the Android OS on a non-Google device.

If you choose to buy this device, it will also ensure you get the latest Android OS versions as soon as they come out. The device will ship with Jelly Bean 4.2, the latest version of Android, and the bootloader unlocked.

The Google take on the Galaxy S4 applies to the 16GB model, comes with LTE support, meaning it's the Snapdragon/Qualcomm model S4, and is on T-Mobile and AT&T in the US.

No official confirmation on the Google Samsung Galaxy S4 release date or price in the UK as yet.