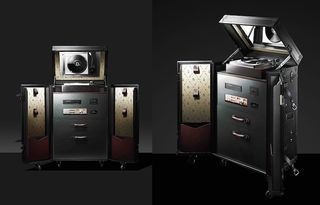 And, making good on the declaration on its "about us" website page to "share the experience and our passion of analogue", it has teamed up with Hertfordshire- based luxury travel brand Globe-Trotter to build the "ultimate listening station".

To justify such self-aggrandisement, the Globe-Trotter X Analogue Foundation Listening Station naturally combines music and booze inside an ornate wheeled cabinet. It provokes images of Sean Connery standing against it listening to Diamonds are Forever and holding a vodka Martini. Shaken, not stirred.

The Listening Station allows you to spin records on a customised Technics SP10 turntable, which is furnished with three Audio-Technica phono cartridges - AT-ART9 and OC9/III moving coil options and AT33Sa Shibata alternatives.

While the analogue army has decked it out with some high-end tech, Globe-Trotter - broadening its scope from leather-bound luggage to music and cocktails - is behind the station's impressive craftmanship.

A built-in drawer, complete with bottle of bournon ans a set of tumblers, only adds to its drawing-room appeal. Sadly though, this station is unique, a one-off that's not for sale. Its sole purpose is to educate populations around the world about the joys of analogue sound.

But you can get your hands on (and ears around) it. Having been on tour around Europe for 18 months, the Globe-Trotter X Analogue Foundation Listening Station is returning to London to be displayed in Globe-Trotter flagship UK store, from 19th February, for a fortnight.

The world now has a choice of Sonos vinyl systems

The Making of: Linn Sondek LP12