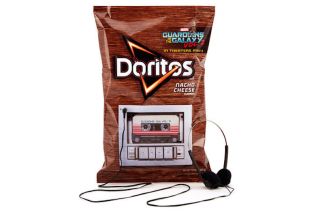 The future is here, there's no denying that. We have a wealth of information at our fingertips with the invention of the internet, radios that can sense our mood and robot assistants in our televisions and kitchens.

But the zenith of technological improvement has surely been reached with a crisp bag that is able to play music.

To publicise the release of Guardians of the Galaxy Vol. 2, a limited-edition series of Doritos bags will play the film's soundtrack, Awesome Mix Vol. 2, through a headphone jack. There's even an old-school cassette player design on the branded bags of the cheesy snack.

The special edition bag will be available from the 28th April via Amazon. It features a 3.5mm headphone jack on the front (we guess it's our duty here to recommend the best wired headphones for optimal audio quality with your crisps). It's also rechargable, for repeat listening.

In a statement to Billboard, Ryan Matiyow, senior director of marketing for PepsiCo’s Frito-Lay North America, said, “The Guardians of the Galaxy Vol. 2 was yet another way for us to take an amazing musical pop culture hit and elevate the experience. Can you imagine a better way to listen to this soundtrack than with a bag of Doritos? We couldn’t either.”

We'd beg to differ - whether it's on record, through wireless speakers or on the radio, there are much better ways to listen to the soundtrack.

Could this be the start of a cassette rebirth, similar to the vinyl revival? Probably not. Still, if you'd really like us to review a bag of crisps, let us know.

MORE: This BBC film on audiophiles in 1959 is a masterpiece