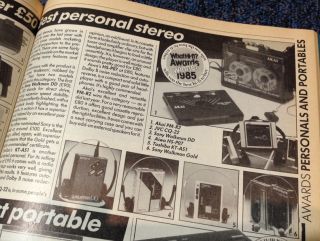 The vinyl resurgence in recent years has been well-documented, with vinyl sales rising from 205,000 copies in 2007 to in excess of 2 million in 2015.

With part of the vinyl boom attributed to the fashion for retro tech, as illustrated by retailers such as Urban Outfitters selling turntables and vinyl, it was perhaps only natural that trend-setters would look to other 'retro' audio formats. Enter the cassette tape - and recent reports of its rise in popularity.

The Daily Mail this week reported that the Recording Industry Association of America (RIAA), the body in charge of certifying gold and platinum records, was investigating ways to track sales of cassette tapes due to an apparent surge in popularity and sales.

Buoyed by the success of niche underground releases on cassette tapes, the report suggested mainstream acts would soon be following suit. A cassette tape resurgence beckoned. Even Justin Bieber was on board, with his latest album already available to buy on cassette.

Alas, the RIAA has moved to quash any building excitement. The RIAA's VP of communications, Cara Duckworth Weiblinger, told Resident Advisor that they had not been notified of any noticeable uptake in cassette tape sales.

"We regularly check with our music label members to see if they are reporting any change in the sales of cassettes, but there hasn’t been for quite some time," said Duckworth Weiblinger.

"It’s such a small number it doesn’t meet the threshold of sales requirements for us to report it (we report sales by category on a scale of millions of dollars and cassettes just haven’t broken that threshold). So there has been no increase in sales of cassettes or a proactive effort to look into tracking this further."

Looks like you can leave that Nakamichi in the attic, then.

That being said, we do know more tapes are being sold - but it's clearly an increase on a very small number. Record Store Day 2015 reported growth in cassette tape sales, while a survey by ICM in April last year revealed 5 per cent of music fans had bought a cassette tape that month, up from 2 per cent the previous year (even if they weren't even listening to it). Perhaps that's why we have seen new portable tape and CD players released this year.

Nevertheless, for now at least, it seems the cassette tape won't be making a miraculous return to favour.

MORE: From CRT to VHS - the tech that got left behind