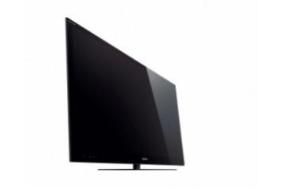 Joined by the HX823 and HX723, these three HX models will have integrated wi-fi enabling you to make the most of Sony's Qriocity service plus the likes of iPlayer and LoveFilm.

Also new this year will be remote control applications for iPhones and Android mobiles, while an Opera web browser application joins apps from the likes of Twitter and Facebook.

Add an optional mic and camera to these new internet TVs in order to take advantage of the Skype app, while there's DLNA and WiFi Direct certficiation, too.

Also new for Sony TVs will be the ability to record directly to a USB hard disk - a feature we've seen from other manufacturers.

Sony's active-shutter 3D glasses have been redesigned in an effort to make them more comfortable, and are now rechargeable.

Elsewhere there's the NX723, which sports Sony's slimline Monolithic design, alongside 3D support and wi-fi integration, and the EX723 and EX523, the former sporting 3D, the latter majoring on Internet video and Skype.

The EX320 edge LED has screen has built-in wi-fi, the CX523 looks like a more basic model with full HD and Skype and there's the CX32BD with a built-in DVD player.

More information, prices and pictures as and when we get it.