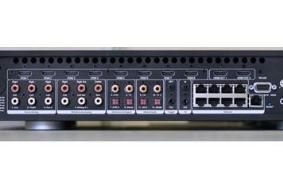 Smart speakers
In the zöet system, signals are distributed to the speakers via Ethernet, using conventional Cat5 cable as part of a home network. And because each speaker 'knows' whether it's a left, a centre, a right and so on, just a single cable is required, and all the speakers are daisychained.

Thiel's system will handle surround or stereo inputs, with automatic mixdown if, for example, you're feeding in a 5.1-channel signal and listening in a 'zone' with just two speakers.

Now, Thiel is developing the theme with a new version of the processor, due later in the year. This has no fewer than eight HDMI inputs and twin outputs, enabling HD audio sources to be connected and video to be routed through the unit.

Control from any room
The system can be controlled from any speaker in the chain, using an optional infrared controller, and wireless networking will also be available later in the year, removing the need for even the single Cat5 running between rooms.

Anyone buying the audio-only system at launch will be able to upgrade to the HDMI version when it becomes available, and Thiel president Kathy Gornik says that “zöet is so smart, absolutely no specialised knowledge is required to set it up perfectly in under an hour."

"It will work with any music or movie player you already own, making it an ideal product for anyone who desires the simplest path to true high fidelity throughout their home."

Automatic integration
The system will also automate channel steering and subwoofer integration, while a built-in algorithm ensures synchronisation between all speakers, avoiding the 'echo effect' sometimes heard in multiroom set-ups.