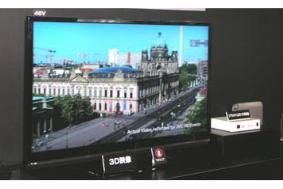 That takes TV all the way up to 35.4 megapixel resolution, much greater than even the Super Hi-Vision systems being propesed by broadcasters including Japan's NHK. But while the demonstration on offer was impressive, it left a number of questions unanswered, like how the system copes with anything that moves.

As usual, we were shown a series of still images of the traditional Japanese lacquer box variety, and that was about it.

Round the corner the company is demonstrating a prototype 3D TV system with a difference: this one works with conventional TV signals, converting them in real time. Add a pair of special glasses, and you get pretty convincing depth to the image, although this does seem to shift with viewing angle.

Other new ideas from JVC include its own take on the ever-increasing refresh rate being seen in the TV world: the company is demonstrating the improvements possible when you move from 60Hz to 120Hz – taking into account the NTSC frame-rate, of course – and then showing the same images on a screen running at 180Hz.

The result? Smoother movement, even though the company made life easy for itself by sticking to slow pans across sheet music, rather than throwing some really fast action at the screens.

There was the usual eco message we've seen on every stand here at the show – the new models use less power than the old, of course – but our attention was also grabbed by the company's iPod-capable TV, which has an integral dock and can upconvert video from the pocket player to the big screen. No news yet as to when that one may hit the shops, however.

As we've seen so much at this show, integration is all...