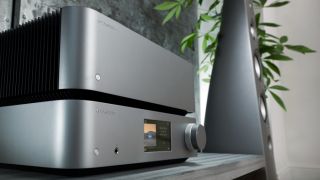 For five decades, Cambridge Audio has been designing and engineering some of the most successful audio products in the UK, in constant pursuit of its founders’ vision: to create hi-fi that delivers the ‘Great British Sound’ into people’s homes. Pure, unadulterated sound that truly represents the intention of the music artist.

Rewind to 1968, and as The Beatles were recording Hey Jude, and The Rolling Stones were gearing up to launch its seminal Beggars’ Banquet album, Cambridge Audio was swinging into the hi-fi world with the release of the P40, the world’s first integrated amplifier to use the now-industry-standard toroidal transformer.

No stranger to further ‘world firsts’, Cambridge Audio’s in-house innovations – including the award-winning StreamMagic streaming platform – have led to an impressive catalogue of respected audio products over the years, all designed to offer the best sound at the fairest price possible.

And today the company is doing anything but rest on its laurels to pursue that. In fact, as part of its half-century anniversary celebrations, Cambridge Audio has not only developed the world’s first aptX HD Bluetooth turntable, the Alva TT, but also launched its best hi-fi ever: Edge - a tribute to the man who was key in the development of the P40, Professor Gordon Edge.

Over three years in the making and utilising a team of nine engineers, the range disregarded the rules of budgeted, time-pressured product-making, pooling decades of engineering experience to create class-leading sound - sound that you, and they themselves, would want to listen to. How? By listening to every component and selecting them on sonic performance alone. Hearing is believing, after all.

The fact that no component was picked on price, specs or measured performance but instead on how each performed in terms of audio performance goes to show the commitment to the cause.

Cambridge Audio’s in-house-designed StreamMagic streaming platform has been instrumental to double-figure Music Streamer Award wins since its inauguration in 2011 – including the 2018 What Hi-Fi? Award-winning CXN (v2) and Azur 851N streamers, no less – and the latest iteration is present and correct in the Edge NQ network player (pictured below), which What Hi-Fi? called “accomplished” and “truly fantastic” in its recent five-star review.

Multi-media moguls with a music source for each day of the week are catered for, as anything and everything can be chucked at it – it supports Chromecast built-in, Bluetooth aptX HD, Internet Radio, AirPlay, UPnP and Tidal, Deezer, Qobuz and Spotify Connect, not to mention audio files all the way up to PCM 32-bit/384kHz and DSD256.

The accompanying, sonically-matched Edge A and W amplifiers aren’t short of technological feat either. In an effort to keep the signal path as short as possible and thereby reduce signal noise, Cambridge removed all capacitors from the circuit board, replacing them by DC Coupled topology.

Then there’s proprietary Class XA amplification that marries the benefits of Class A (sound quality) and Class B (power efficiency) design to deliver an effective, distortion-free performance, while the toroidal transformer technology pioneered by Cambridge from its outset has been advanced by the introduction of a second toroidal transformer in opposing symmetry to cancel out magnetic interference.

Of the opinion that hi-fi should be seen as well as heard, Cambridge wrapped that all up in a strikingly elegant aluminium exterior - a refined aesthetic that has been carried through into the brand’s all-new Alva TT turntable.

As with all Cambridge products, the Edge and Alva TT’s research and development took place at its London HQ, where a 20-strong Engineering team, from industrial designers to electrical engineers to coders, tinker away together to create world class designs. And in this case, first-of-its-kind designs too.

Click here (UK) or here (US) to learn all about the Cambridge Audio Edge range.

You can also discover Cambridge’s Alva TT turntable here (UK) and here (US).