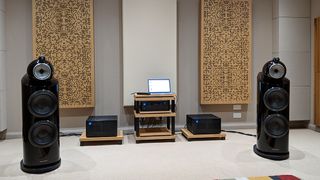 Big hi-fi news: Sound United has announced it has entered into a preliminary agreement to acquire Bowers & Wilkins, with the British speaker brand stating that negotiations with Sound United have begun "to explore a possible combined future".

In a brief statement, Sound United - a portfolio company of a US-based private equity firm who already owns Boston Acoustics, Classé, Definitive Technology, Denon, HEOS, Marantz and Polk Audio - announced its intention to acquire arguably the biggest name in British hi-fi. Sound United "today announced it entered into a preliminary letter of intent to acquire Bowers & Wilkins," it read. Kevin Duffy, CEO at Sound United, commented: "B&W is a transformative brand and we look forward to the opportunity to finalize the transaction."

Bowers & Wilkins' responded with a slight change of emphasis, saying that discussions are under way "to explore opportunities for the two businesses to combine".

Geoff Edwards, CEO of Bowers & Wilkins, said in a statement: “Discussions between Bowers & Wilkins and Sound United are at an early stage with a view to consolidating our premium brands into a new group offering even better consumer opportunities.

"If our discussions are successful, combining Bowers & Wilkins’ engineering and manufacturing expertise in the premium category with the breadth of resources and capability of Sound United could certainly be a transformative step for both brands. It would allow the Bowers & Wilkins team even greater opportunities to focus on what we do best – building the industry’s finest loudspeakers.”

Earlier this year, B&W confirmed a restructuring following the departure of their CEO and the souring of the relationship with Eva Automation, a Silicon Valley start-up that had acquired the brand back in 2016. Eva Automation had driven the launch of B&W Formation, the company's first multi-room wireless system, with rumours subsequently swirling around the success or otherwise of the likes of the B&W Formation Duo.

One thing both parties agree on: discussions are ongoing. More details as and when we get them.

17 of the best B&W products of all time