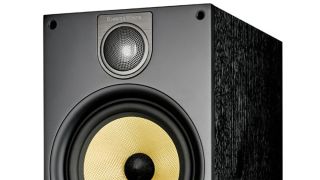 When John Bowers founded Bowers & Wilkins back in 1966, he probably didn't dare to dream that his fledgling speaker company would grow to the size it is today, having had the influence it's had over the global hi-fi market. It was perhaps no surprise the company attracted the attention of a Silicon Valley start-up, which acquired the business in 2016.

Nevertheless, B&W still manufactures some of its most popular speakers at its headquarters in Sussex, England, where the company was founded. But that's not to say the company has stood still; as this list testifies. We've rounded-up a selection of our favourite B&W products to have featured in the pages of What Hi-Fi?. Naturally for a speaker company, it's dominated by stereo speakers, but you'll also find headphones, an iPod dock and even a home cinema system. So take a trip down B&W memory lane...

We start with a relatively affordable speaker, the DM110 (£110 when we reviewed them in June 1984, so around £300 in today's money). These speakers sported a black chipboard cabinet with a silver baffle, a 32mm soft dome tweeter and a 50mm paper mid/bass driver. We described it as, "a mass produced speaker made in very large quantities for export", which sounded then, strangely, like a criticism, but with B&W now shifting large numbers of speakers all over the world, it was something of a trailblazer. Certainly, "powerful yet easy going" with a "striking, stylish finish", successfully set the tone for test verdicts that would apply to B&W speakers for many years to come.

The Matrix 805V speakers saw a 26mm metal dome tweeter placed on top of the speaker cabinet above a yellow 165mm Kevlar cone, two design features that were soon to become synonymous with B&W. Inside the speakers a honeycomb-style bracing construction aimed to remove all unwanted resonance and reflections; the design giving the speaker range its Matrix name. And it was a design theory B&W revisited with future speakers, including its T7 portable speaker. We said that the Matrix 805V speakers "squeeze a huge sound out of small boxes", which made them a hit with us, despite their relatively high price tag (£795, back in 1992).

"This is a hard-nut speaker, but it's educated and decisive too. Dynamic and controlled – there's not a lot to touch it at the price." That's how we described the CDM1 speakers back in 1995. They too featured a 165mm yellow Kevlar cone but interestingly opted for a sloped baffle where the tweeter was housed, a tweeter that was derived from the one found on the Matrix series. We're pleased to see we reviewed these speakers by "playing Black Grape's Shake Your Money at exceedingly high volume", so not much has changed there.

These £7000 B&W speakers found themselves in our July 1998 Temptation section. And very tempting they were, too. That isolated tweeter is back alongside a hefty Kevlar midrange driver and an aluminium bass cone. The Signature series were limited edition speakers, with pure silver wiring as their pièce de résistance. Driver leads, internal wires, voice coils and crossover wiring were all silver, which B&W engineers had decided were the optimum conductors for top-end speaker drivers. We didn't argue, heralding the Signature 30 speakers as "the ultimate in silver-spun sound with style".

"If the price isn't an issue - nothing", was the sum total of our Nautilus 801 review of January 1999. "Simply awesome." These 801s borrowed technology from the company's flagship Nautilus speakers, which quickly planted themselves at number one on many people's ultimate speaker wish list. You needed to part with £8500 rather than £35,000 for this version, which borrowed the tapered tube enclosure for the midrange and treble drivers that aimed to minimise the diffraction caused by the cabinet. The Kevlar driver (a monster 38cm unit) and Matrix bracing is here, too, as B&W began to focus its technological attentions. The result here is accuracy and pure transparency in great big spades.

The Series 2 version of the B&W DM602 speakers appeared in our July 1999 speaker "shootout" - hence the slightly strange picture - and proved brilliant value for money, not least in terms of sheer cabinet size. That large box means plenty of bass, alongside a transparent and detailed midrange (OK, and a slightly forward treble). The DM602s were consistent performers over the years but it was the Series 2 and Series 3 models that really took them to the next level.

We've opted for Series 3 as our favourite version of the DM601 speakers, though again we could have opted for pretty much any model. These speakers, reviewed in March 2002, were famously described as having "voice coils of the Gods" by one What Hi-Fi? reviewer, such was the impression they made in our test rooms.

The basic ingredients are unchanged here, with the Kevlar-coned mid/bass driver, alloy-dome tweeter and tapered internal tube. Various tweaks and upgrades around the driver and cabinet helped lift these B&Ws to new heights and beat-off opposition at its £249 (March 2003) price tag: "Stunning speakers with a formidable array of strengths."

First reviewed back in November 2004, the B&W PV1 active subwoofer won seven What Hi-Fi? Awards in a row. Need we go on? OK, well firstly, check out how cool it looks. Secondly, understand the smart spherical design is for performance reasons, promising to deliver "the Holy Grail of subwoofer design: deep and clean bass from a near-invisible box". The PV1 uses two 20cm drivers in an opposed, in-phase array powered by a 500-watt Class-D amplifier. The results are sensational: almost zero resonance but stunning speed and power, and a remarkable sub that rocked our world - and our test rooms - for the best part of a decade.

Another classic B&W speaker design, this time as featured in our May 2007 review. The pod-mounted metal dome tweeter, the Kevlar cone, the braced cabinet; the 805S speakers have the full suite of Bowers & Wilkins speaker technologies. They sound even better than they look, with a room-filling soundstage that's balanced and detailed. Even at £1600, they were Award-winning value for every penny.

Making a great-sounding iPod dock wasn't as easy as it might sound (see Apple's three-star iPod Hi-Fi), which made the B&W Zeppelin (pictured here in our review from September 2008) all the more impressive. Another striking B&W design, you needed to clear a fair amount of desk space but were then treated to a detailed, spacious sound from your centrally-mounted iPod. In what would be a sign of things to come, B&W had successfully entered a new product category with another sweet marriage of stylish design and sound quality.

"PC Audio" sounds somewhat dated nowadays but the MM-1s were essentially a very good pair of desktop speakers - "edging towards proper hi-fi" as we phrased it, perhaps in one of our harder-to-please moods. At £399 (June, 2010), these speakers weren't cheap but they delivered a level of sound almost in spite of their size (just 17cm tall) to comfortably justify their price. Yet again, B&W had turned its hand to something new and knocked it out of the park.

Did we mention B&W turning its hand to something new and knocking it out of the park? It was the same story when it came to headphones. While the first B&W P3 and P5 headphones were good but perhaps not great, we were fully bowled-over by the big-boy P7s (and then later, the Series 2 smaller cans). All the headphones shared a similar sleek design, could fold-up for easy portability, were comfortable and, crucially, delivered a sound with impact, insight and impressive scale.

And it's not only stereo speakers (and subs, headphones and desktop speakers...), B&W had a decent run in the world of sub-sat speaker packages back when sub-sat speaker packages were still a thing. Despite not relying on the formidable PV1 subwoofer for its solid foundations, the MT-50 delivered a dynamic, detailed and authoritative performance that was hard to beat for the money (£1095) for many years. The M-1 satellites formed an integral part of a few more great little B&W cinema systems, such as the MT-30 and MT-60, both of which also benefitted from the PV1 sub.

If you've got £18,000 to spend on a pair of speakers (you lucky thing), you should very much consider spending it on the B&W 800 Diamonds; "the best speaker B&W makes", as we called them back in September 2013. If you need to club together with a few friends for that sort of money, that might be no bad thing; just moving one of these 102kg speakers into place is a four-person job, standing as they do, 118cm tall, 45cm wide and 65cm deep. "Innovative technology and great sound don’t always go hand in hand. In the 800s’ case they do." The company’s best speakers, yes. The best speakers bar none? Quite possibly.

You'd be hard-pressed to find a more competitive product category than £500 bookshelf speakers. So standing out and dominating over a period of a few years takes some doing. But that's just what the 685 S2 speakers did following their launch in 2014. It was perhaps no surprise considering the quality of their forebears, the original 685s. As well as the now very familiar Kevlar mid/bass cone, the S2s had a metal grille over the tweeter, aiding dispersion and adding a degree of protection. The tweeter itself had been made more rigid and decoupled from the cabinet. Crucially, the sound produced was powerful and muscular, with deep bass and lashings of detail. And they proved very popular.

Another addition to the B&W Diamond range, the 805 D3s brought with them some not insignificant changes to B&W's already highly-successful high-end range. The diamond-dome tweeter was completely overhauled, while more jaw-droppingly for B&W nuts, the Kevlar mid/bass driver was replaced by a new Continuum cone.

Developed in-house, the Continuum material aimed to take the key properties of Kevlar - good self-damping and low mass - and take them to the next level. It was cost-effective, too, so would soon find its way in to far more affordable speakers. "Polished Diamond is an absolute gem," was our June 2017 verdict, thanks to great detail resolution, incisive stereo imaging and that tip-top build and design.

Bringing B&W, and British hi-fi, right up to date, we have the excellent the B&W 606 speakers, which appear in our March 2019 issue (yes, we like to get ahead of ourselves). They build on the success of the aforementioned 685 S2s, and use a whole heap of technology developed across aforementioned speakers on this page.

They use the company's now favoured Continuum cone, here in a 16.5cm driver, sport a decoupled double-dome aluminium tweeter, and have B&W's Flowport vent. A smart, minimalist styling has replaced the more striking designs of the 90s and 00s, but the so often class-leading sound quality remains. Upbeat, entertaining and brilliantly balanced, they're once again looking like the £500 speakers to beat...