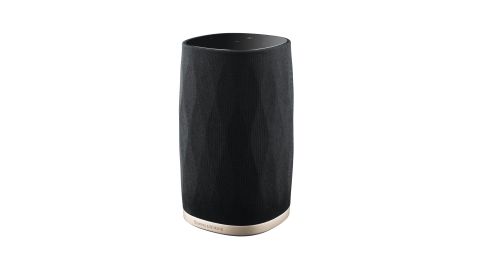 The B&W Flex delivers a more hi-fi sound than anything else this size, but it’s expensive and not without software gremlins

There is a school of thought that getting a first-class undergraduate degree does not look good to prospective employers. It’s a sign that a person is all work and no play – someone who’s not well rounded, a bit of a stiff. It’s an idea that’s probably spread by students destined for a 2:1, but there’s something about listening to the Bowers & Wilkins Formation Flex that makes us wonder whether there might be some truth in the matter.

The B&W Formation Flex wireless speaker appears to have been added to the Formation multi-room series as an afterthought. The other five members of the family turned up en masse in April, with the cheapest at the time being the Formation Wedge (£899/$899).

At just under £400 ($449), the compact B&W Flex is a far more affordable proposition for Formation, and it takes on the likes of the Sonos One and the larger HomePod for form and performance.

The Flex certainly looks like a Formation speaker. It’s a silky, black cylinder, with a cross section that’s almost exactly halfway between a square and a circle. At over 21cm tall, it is destined to be the kitchen or bedroom speaker of the range. Not only is it a great size for popping on a work surface or a shelf, it’s also reassuringly heavy at 2.3kg. You’ll be hard pressed to knock it over by accident.

The top is a black touch-sensitive surface where you’ll find controls for volume, pause/play and there’s also a Formation icon control for use in set-up, to cycle through inputs and for stereo pairing too. Some may prefer hard buttons instead, but you can’t argue that this approach isn’t sleek.

The brushed metal base is the only accent on what is a smart aesthetic. The ports are tucked away neatly underneath. There’s one for the power cable, one for ethernet (for those who prefer a wired connection), a reset button and USB port for service only. Aux playback through a wired device is not possible.

Its small size means some considerable limitations for internal engineering. Nonetheless, B&W has squeezed in a 100mm woven glass fibre bass/mid-range driver, a 25mm decoupled double dome tweeter and a pair of 50W digital amps to power them.

Our previous reviews of B&W Formation products have touched upon our frustrations with the software. And while the B&W-made Formation app looks good, it doesn’t feel fully formed.

Initial set-up is easy enough. The app guides you through the process of pairing with the Flex through Bluetooth, then hook up to a wireless network and key in your password. Name your Flex in the app and that’s more or less the extent of what it can do. You can change the volume using the app, you can make it discoverable as a Bluetooth device and update the firmware when necessary but, in terms of playback, it has little else to offer.

Instead, B&W has outsourced all that to a third party in the shape of Roon. While Roon is a perfectly capable piece of control software, it requires a subscription fee of $119 (£95) per year. It may be worth the outlay if you’re buying a pair of £3500 B&W Formation Duo speakers, but it’s nearly another 25 per cent on top of the price of a Flex.

You don’t have to have Roon to use Flex, but you simply won't get an optimal experience without it. You can still stream music over Bluetooth (aptX HD is available), Spotify Connect or Apple AirPlay 2, but to get the best possible music quality out of the Flex, including up to 24-bit/96kHz playback of your locally stored, hi-res files, Roon is the way to do it.

Some may be considering the Flex as a standalone device and might not care about hi-res playback. Others may buy Flex as an add-on to a pre-existing Formation set-up and may already have Roon. However, the principle of having two or more software packages involved makes set-up and control more complicated than it needs to be and adds potential for confusion.

This is the third time we’ve used a Formation product and on each occasion, we’ve had issues on the software side. It’s not as straightforward and seamless as a product of this type and price point should be. B&W needs to finish its good work and make a proper Formation app that does everything in one. It’s too easy to suggest that multi-room buyers look elsewhere until that’s sorted.

We turn to our collection of FLACs with Roon and select Me And Mr Jones by Amy Winehouse. For a small form, Flex can certainly belt it out, rather like the late diva herself.

It’s not the weightiest of sounds, but B&W has gone for something far tighter. Many wireless speakers try to compensate for their missing body with an overly thick slice of bass. Not so here. If anything, the bass is a little too discrete. It’s tight and it’s clean, but to maximise authority, we position the Flex closer to the wall than we might ordinarily.

Out in the open, the Flex has quite a clinical performance. It feels engineered to a fault. It’s as if there’s been so much attention to the precision and the detail of the sound that the warmth and expression have been bypassed. Winehouse’s big band and backing singers sound as though they’re pushing through the track without making any mistakes, rather than remembering to entertain the audience.

The dynamics and timing are good for a speaker of this size. There’s certainly a more hi-fi type of sound here than you’ll get from the Sonos One, for example. Compare it to the Audio Pro Addon C10 (£279), though, and you’ll realise how uptight and thin the Flex sounds in comparison. It may be crystal clear but, like our first-class honours student, it’s so well schooled that it’s unfamiliar with the concept of fun. It’s all starched collar and spreadsheets, and no office banter.

Flex can be used as a stereo pair if you have two, or even added to the Formation Bar and Bass as the rears of a 5.1 set-up. While we can’t test out the home cinema configuration, we are lucky enough to have two Flex units to try on their own and in stereo too.

As a stereo pair the sound becomes far more room filling. The added dimension even begins to plug some of those gaps in the performance but, as big as it gets, it still can’t achieve the dynamic fluidity or openness that we’re hoping for.

It also starts to show up problems on the software side with the connection between the stereo pair occasionally playing up. There’s often too long a delay between selecting a track and playback beginning when using Bluetooth as well. The product feels like it needs a thorough software update.

For a wireless speaker of this size, you won’t find a clearer, more precise sound. But the Formation Flex is expensive and we think Bowers & Wilkins needs to sort out the software, including a proper, all-encompassing Formation app, before we can wholeheartedly recommend it.