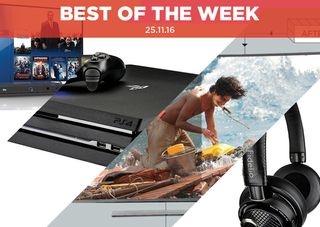 This week, LG faces the prospect of Chinese competition in the OLED TV market, Sky announced a slate of new features for its Q TV service and 4K HDR TV broadcasts could be on the horizon in 2017.

For reviews, we have a fantastic Lightning-compatible headphone in the Philips Fidelio M2L, a 4K-capable console in Sony's PS4 Pro and a great wireless speaker in Audio Pro's Addon T5.

And, in case you hadn't noticed, it's Black Friday. We've rounded up a number of deals (some of them exclusive) to help you navigate the crowds and get the bargain you're looking for.

MORE: What Hi-Fi? Black Friday deals of the week

Chinese OLED TVs are on the way, could drive prices down

LG is currently the market leader in OLED production, but the deal means that Skyworth – which used to rely on LG for its panels – can now determine its own prices.

Skyworth could potentially undercut LG and bring OLED prices tumbling down. We'll see whether this is the case next year when its OLED set goes on sale in China and Europe.

MORE: Chinese OLED TVs are on the way, could drive prices down

Here are the new Sky Q features coming in 2017

Award-winning TV service Sky Q is set to get a number of new features, giving viewers more access and control.

Owners of the 2TB box will soon be able to record six channels while watching a seventh (up from four and five).

New show recommendations will be based on a viewer's history, and if you join a sports event midway through you can watch from the beginning thanks to the Start Over feature.

MORE: Here are the new Sky Q features coming in 2017

The Digital Video Broadcasting (DVB) steering board has added new specifications to the UHD standard.

They include HDR, frame rates of more than 50/60fps and immersive sound experiences such as Dolby Atmos and DTS:X.

The board suggested that this standard could come to fruition next year… as long as hardware manufacturers and broadcasters adopt it.

Amazon in talks to offer live sport through Prime Video

The best Black Friday PS4 and Xbox One UK deals

Save up to 50% with the best Black Friday Chromecast deals

Save up to 34% with official PlayStation Black Friday deals

The sound is exciting and detailed, with a strong sense of timing and impressive dynamics. However, the cable lacks flexibility and can't be swapped out for a 3.5mm connection.

Even so, this is a fantastic effort. If you're an Apple user and aren't tempted by wireless, these are a fine solution.

Sony's revision of the PS4 has given it more horsepower for 4K gaming, although that comes with a caveat - many titles are not upscaled to 4K.

On upscaled games, the result is undeniably impressive, but elsewhere the 4K options are limited. There's no UHD drive for 4K Blu-rays and the streaming apps are lacking some, if not all, 4K-releated features.

We expect these to be updated soon, but in the meantime, the Pro is a fine upgrade on the original and further ahead of the Xbox One S in performance.

Audio Pro's latest entry in the Addon family is bigger than the award-winning T3 and every bit as good.

It doesn't have the T3's portability, but it does have great dynamics and a sound that's expressive and well balanced.

If you're in the market for a wireless speaker, we'd be hard-pressed not to recommend the T5.