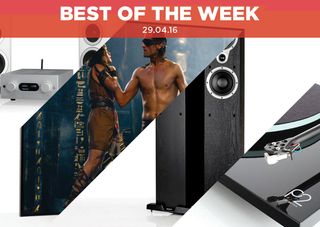 This week Rega announced a new version of its Planar 2 turntable, Audiolab is expected to confirm its M-ONE int. amplifier at next week’s Munich High End Show and Technics confirmed the price of its SL-1200G turntable - due to go on sale later this year.

In terms of the best reviews from this week, there’s Tannoy’s Eclipse Three floorstander and glowing 4K HDR TV reviews for the Sony KD-75XD9405 and Samsung UE55KS7000.

MORE: That Was Then… Tannoy Mercury M3 review

Hot on the heels of its Planar 3, Rega has announced a brand new iteration of the Planar 2 turntable.

The Planar 2 has been in development for the past few years and will come with a brand new RB220 tonearm, an upgraded platter and improved stability, while also borrowing the floating glass ‘Optiwhite’ design from the P3.

We mentioned not long ago that the limited edition Technics 1200GAE turntable was going on sale later this year. The company has now confirmed that the standard version, the SL-1200G turntable, is due for release this autumn.

The SL-1200G is very much focused on audio performance, with the deck using a new ‘coreless direct drive motor’ to better suppress vibrations caused by the motor.

It will retail for the same price (£2799) as the GAE edition, and matches it in most respects save for a few design tweaks.

Audiolab is expected to launch the M-ONE at next week’s Munich High End Show. It’s a piece of hi-fi that combines an integrated amplifier, DAC and wireless Bluetooth connectivity into one whole.

First seen at the Bristol Show earlier this year, the unit looks similar to the M-DAC+ with plenty of connections (RCA as well as digital coaxial and optical inputs), and support for hi-res audio up to 32-bit/384kHz.

There’s no word on the price, but we’d expect that to be cleared up next week in Munich.

After an underwhelming 2015, Sony’s TV department is back and looking like it’s learned a lesson or two from last year.

The 55XD9305 stormed out of the blocks and the 75XD9405 follows in much the same fashion. The 4K picture is sharp and rich in colour and though its implementation of HDR may not immediately grab your attention, the subtle colour gradations of HDR are impressively rendered.

It’s been a while since we last tested a fine budget floorstander, and this effort from Tannoy is one we wouldn't hesitate in recommending.

The Eclipse 3s offer a performance that is articulate and, more importantly, fun. They’re easy to set up and partner, and a reassuringly fuss-free pair of speakers.

They’re not perfect, but for a budget floorstander, they’re among the best we’ve heard in some time.