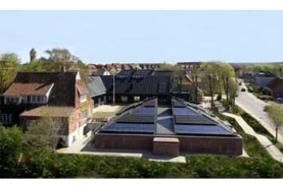 The pyramid-shaped building houses an art collection as well as workshops designed to keep the prized exhibits functioning, and will give the general public the change to see items previously only displayed in the 'time tunnel' deep in the basement of the company's HQ.

Over 300 products will be on show from the company's collection on more than 3000 items, including the Mains Receiver, the first mains-powered radio in Denmark, and which incorporated the company's first-ever product, the Eliminator, designed to bring mains power to battery radios.

The new museum has been designed to be fully interactive: a 'town clerk" will continually contribute stories to its website, where they can be commented on by visitors, and in addition screens around the building will allow comments to be recorded regarding impressions of what's on show.

You can also explore the history of sound, pictures and electronic media through products and associated material such as advertising materials.

As the company puts it, "Highlighting an amazing range of historical products and large parts of the current product portfolio, the museum will also feature wall and screen projections of archive footage as well as a host of historical collectables and memorabilia like pamphlets, posters, brochures, catalogues, pictures and films."

These include the famous shot of one of Bang & Olufsen's sleek Beocenter systems being subjected to close scrutiny by interested observers!

Visitors will find three main exhibition areas: The Contemporary Universe, which details developments over the last ten years to the present day; The Media Explosion, which covers the period from 1950 to the late nineties; and, finally, The Distant Past/The Near Future.

That last section looks at the near technological future and also depicts the early company history from 1925 to 1950, highlighting the story of founding fathers Peter Bang and Svend Olufsen (left).

It's planned that the museum will also stage special exhibitions covering subjects as diverse as radio, TV and this history of the company's first stereo cartridges.

The museum is the result of several years of redevelopment work and expansion, which finally saw the site re-open two weeks ago. The work cost around 5m euros, half of which was given by a fund created by Peter Bang and his wife Kirsten.