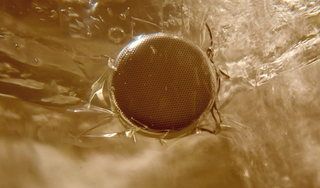 What's the fastest way to mix music and alcohol? A beer and vinyl subscription service? Stylus, which sends a bottle of wine with your records? Or lowering a wireless speaker into the brew and pumping it full of music?

B&O thinks it's the last one. In "an effort to further connect with its audience of urban creative music lovers…B&O PLAY has teamed up with one of the world’s most innovative and highly respected breweries, Mikkeller, to create Beobrew - a beer that is infused with music".

Specifically, you drop a Beoplay A1 speaker into the fermenting tank and then play music through it during the two-week conditioning process.

According to Head Brewer Kyle Wolak, "As the music plays, it pumps out a unique pattern of vibrations that assists the yeast during fermentation and encourages it to produce more flavourful esters than it would have without the presence of music.”

While the What Hi-Fi? team is more accustomed to drinking beer than brewing it, this nevertheless seems like an interesting claim. And we're more than happy to try it out.

Mikkeller describes the resulting beer as a 6.8% American-style IPA that has a “bright and aromatic taste with citrus fruit and floral notes.” Musical notes, we assume.

If you're in Denmark, Sweden, Germany, Spain or the US, you'll be able to get Beobrew at Mikkeller bars. If you're in the UK, you can get some sent to your door via the company's website soon.