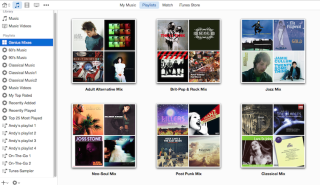 The Apple streaming service is likely, somewhat predictably, to cost $10 per month, making it a direct rival for the likes of Spotify and Tidal. It had been reported that Apple was trying but failing to get record labels to agree to a cheaper subscription cost than Spotify.

According to sources speaking to the Wall Street Journal, the new service will initially run alongside Beats Music and not replace it as originally assumed. Apple is expected to offer a free trial of its service, which is fairly typical, though some rumours suggest the trial period could be longer than industry standard 30 days.

It also appears that iTunes Radio is set to play a prominent role in Apple's streaming ecosystem. The service (which still isn't available in the UK) allows you to stream radio 'stations' based on your musical tastes, as opposed to searching for and creating playlists based on individual tracks.

Made popular by Pandora in the US, it's a feature replicated on services such as Deezer and Tidal. But naturally Apple will aim to provide a twist.

Speaking to the New York Post, industry insiders claim Apple is already in negotiations with a number of superstars from the music world to be guest DJs on iTunes Radio, starting with hip-hop artist Drake, who has supposedly been offered a $19 million deal by Apple.

There are also strong rumours that Apple is planning a service called Apple Connect, based on user-generated content.

This rumour ties in nicely with Apple's hire of Kieran Yeates, who was the man behind the 'BBC Introducing' initiative, a platform for new and unsigned artists to upload music and potentially have it broadcast on BBC Radio. It sounds like an Apple equivalent could be on the way.

Keep your eyes locked to What Hi-Fi? on Monday 8th June when all will become clear at Apple's WWDC conference...

MORE: Apple music streaming service - what we expect to see