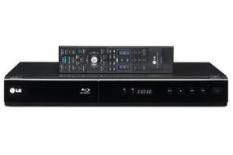 During the format war, LG hedged its bets with universal players, capable of playing both HD-DVD and Blu-ray discs. But, following the demise of HD-DVD, the Korean giant has left its multiformat players behind in favour of dedicated Blu-ray players.

The BD300 is a relatively subdued, understated player. The loading drawer is located behind a drop-down panel on the fascia, which also conceals a USB slot to allow BD-Live functionality and playback of compatible video and audio files.

The LG offers a standard selection of video and audio outputs to choose from, including HDMI, component video, digital optical and digital coaxial. LG could have won a few extra friends by including a set of multichannel analogue inputs for owners of older AV receivers.

The LG will stream all high-def audio formats in their native form, but the player's HD onboard decoding is limited to just Dolby TrueHD. You can use the BD300's elongated remote control to access menus mid-film and resume playback from where you left off.

LG fails where it matters most
It's a shame that our positive outlook on the BD300 crumbles with its picture and sound quality. With video playback, the LG has a real problem with black depth. Instead of looking dank, dark and downright miserable, The Dark Knight Blu-ray appears washed out.

There's also a serious lack of image stability. As Meryl Streep writhes around on a rooftop singing the theme tune to Mamma Mia! there's noticeable judder around her dark blue dungarees. Edges become frayed with any sudden movement.

DVD playback is hindered by noise and a lack of sharpness. Throughout Babylon AD, Vin Diesel's face looks ill-defined and the slightest movement causes this player serious aggravation.

In the sound department, the LG struggles to excite, too. It lacks the drive and dynamism of class leaders at this price. Surround effects don't have the same impact and it all sounds decidedly dull.

The problem for the BD300 is that its key rivals are cheaper and far superior. Even the most ardent LG fan would struggle to make a convincing case for this player.