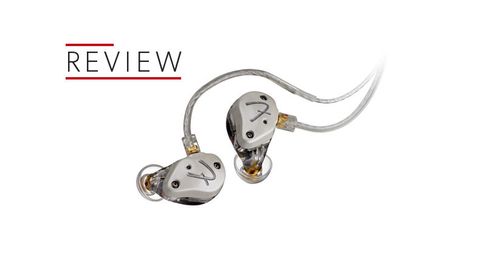 These high-end, in-ear headphones might impress for their name and style, but the average sound performance won’t capture everyone’s heart

Never judge a book by its cover, so the old adage goes, but when a product like the Fender FXA9 comes into your hands, it’s difficult to resist.

Fender's reputation is tied into the legacy of rock music through its famous amps and guitars. Those with enough disposable income (these are £1100 headphones, after all) will find these a tempting proposition because of it.

But before we dive into the sound quality, it’s worth considering the kind of audio kit you’ll need to get the most out of expensive in-ears like the FXA9s. If you just plug them into the headphone jack of your smartphone, you won’t truly hear what they are capable of.

The least we’d recommend is a dedicated DAC (digital-to-analogue converter) – something approaching the quality of the Chord Mojo (or better) will be able to squeeze every detail out of your music.

If you want to take them into the outside world – and that’s what in-ears are for, after all – you’ll also want to invest in a potent portable music player such as the Astell & Kern Kann.

In comparison to most headphones, the FXA9s provide a dynamic, detailed, and energetic rendition of anything that passes through them.

When we play Aliotta Haynes Jeremiah’s Lake Shore Drive in CD-quality through the Astell and Kern Kann, the piano shines brightly with each upbeat note and the light, sandy guitar strums reverb nicely.

Similarly, Michael Jackson’s Don’t Stop ‘Til You Get Enough in high-res 24-bit/88kHz has every element of its frequency range tended to.

From the iconic high-pitched squeal that kicks the song into gear to the quiet, intimate lyrics as the track builds momentum, these headphones balance both ends of the spectrum even-handedly, without that hint of harshness that plagues lesser products.

And with regards to the low end, the FXA9s have a big, bombastic quality that doesn’t pull any punches.

The powerful high-octane booms in Muse’s Supermassive Black Hole strike you immediately, and yet these headphones don’t use that as a substitute for insight. You can still make out the layers of bass frequencies in each hit.

Yet despite all their laudable qualities, there are still some areas where the FXA9s could be improved. Compared to the Shure SE846s – our favourite in-ear headphones in this price range – the FXA9s have trouble keeping up.

The SE846s offer greater refinement in the midrange and a better sense of the emotion behind the tracks. Jeremiah’s nostalgic yearning in Lake Shore Drive isn’t as explicit when played through the FXA9s, and the track feels a little thin and artificial in comparison.

It also becomes noticable that these headphones have a slight issue with timing. They struggle to tie the frequency range together, making it a bit more difficult for them to get your foot tapping along to the beat.

In terms of purity and accuracy, the FXA9s don’t quite match the standards of other similarly-priced headphones either. There is simply more to hear from rivals and, as such, they come out as merely average in this price category.

That’s unfortunate, as the company has clearly taken care in designing the FXA9s. These headphones look the part and are unmistakeably Fender - discrete enough to fit comfortably in the ear while still proudly displaying the iconic ‘F’ on their sides.

The cable curves around your ears and its stiffness helps keep the headphones secure. It’s also detatchable, so should one get damaged, you can easily replace it.

There’s a small carry-case included in the box, as is a 3.5-to-6.3mm adapter, a cleaning tool and a range of earbuds.

A good fit is fundamental to good sound, so Fender offers a range of sizes to ensure you get the optimum connection between the headphones and your ear canal.

The buds themselves have been manufactured around scans of thousands of people’s ears, with Fender claiming they fit 95 per cent of people.

The FXA9s have also been designed to reduce ambient audio, with the company claiming 22dB of background sound is filtered out to get the most out of the six drivers inside the headphones – each one focusing on a specific part of its 12-22,000Hz frequency range.

After extensive use in the testing rooms and office, there’s no denying that these headphones are certainly snug and do a solid job of stopping outside noise from getting in.

But ultimately, the Fender FXA9s sit in review purgatory: satisfying enough to avoid a bad review, but not adept enough to warrant a great one.

These in-ears will easily top your run-of-the-mill headphones but, if you’re putting your own hard-earned cash forward and expecting to get a top-class pair of headphones in return, there are better alternatives available.

Read all our Fender reviews