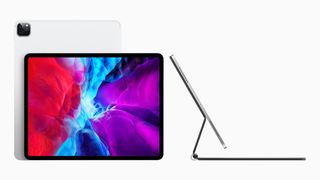 Apple's iPads are some of the best tablets around. And with a range of models at various price points, there's something for everyone.

Here we've rounded up the best iPad deals available right now, and that includes savings on the iPad Air and iPad Mini, plus the chance to get free AirPods or a trade-in bargain.

Deals on any Apple device are quite hard to come by, but we've done the bargain-hunting so you don't have to – and below you'll find the cheapest iPad prices online.

Now, which iPad deal is best for you?

iPad Mini 64GB | £349 at John Lewis
Save £50 on the iPad Mini right now at John Lewis (and Amazon and Currys). This model features the latest Apple A12 chip and iOS software, a 7.9-inch screen, wi-fi connectivity and 64GB storage.View Deal

iPad Air 10.5in | 64GB | £452 at Amazon
There's a handy £25 off the iPad Air at Amazon, bringing the price down to a very respectable £459. It's the wi-fi-only model, and the full discount only applies to the space grey version – the other colours have less money off.View Deal

Apple iPad 32GB | £329 at Laptops Direct
And if it's the standard iPad you're after, you can save £20 with this deal at Laptops Direct. The 10.2in tablet now supports the Apple Pencil stylus for doodling and drawing on screen.View Deal

The iPad Air is the slimmest and lightest full-size iPad that Apple makes (only the iPad Mini equals it for slimness and bests it on the weight scales). At 10.5in, its screen is pretty big and there's HDR support for showing off Netflix in all its glory.

Its sonic abilities are decent too, marred only by the slightly awkward speaker placement (they're on the bottom when held in portrait mode, so if you watch a film in landscape all the audio comes from one side).

It too works with the Apple Pencil if you fancy getting creative, but like most modern tablets there's no 3.5mm headphone jack.

The Air is Apple's best all-rounder – it's powerful enough for most tasks, the battery life lasts all day, and it's slim and light enough to not weigh you down. This means for most of us looking to watch, listen and play on the move, it's the best bet out of Apple's iPad range.

If you're always on the go and want a small screen for dipping into e-books or casual watching, the iPad Mini could be your ideal travel companion.

Its 7.9in screen is the smallest of any iPad, making it better suited to TV shows and YouTube videos than proper, cinematic viewing. But the fact it has the highest pixel density of any Apple tablet makes it a joy to watch on.

The speakers aren't going to rival the best desktop computer speakers, but they're not bad considering the size. And we'd wager that 99 percent of listening will be done through a pair of wireless headphones – in which case, the iPad Mini excels.

Put simply, this is arguably the best iPad around, and well worth considering for anyone always on the move.

The iPad Pro is the biggest and most powerful tablet Apple makes. It's aimed squarely at creative professionals – those pointy-glasses-wearing content creators who illustrate, design, animate and produce. And it's perfectly suited to the task.

The 10.5in screen is like a large, bright electric canvas, with its OLED panel giving you a stunning contrast ratio. And if it's not big enough for you, you can always go for the more recent 12.9in model instead.

Apple's own processor won't slow down the action no matter how demanding your graphical needs, and it's compatible with the Apple Pencil stylus (sold separately) for doodling on screen. Add all-day battery life and superb sound, and you've effectively got a mobile office for today's creative professional.

The iPad Pro is bigger than Apple's other tablets, and its feature-set is a little overkill for just consuming media. In other words, if you're after a machine for just watching films, playing games and listening to music, you might be better served by the cheaper iPad Air. But if you're creating content as well as consuming it, look no further.

The standard iPad is now in its seventh generation - that's just one fewer than the epic Fast & Furious film series. But unlike Vin Diesel's franchise, Apple's tablet just gets better and better.

Once the only member of the iPad range, the standard iPad is now the entry-level model, with a more modest price tag than its siblings. That also means it's less well-specced - it has less storage than the rest of the family, less power, and is fatter and heavier than the iPad Air, with a slightly smaller screen. Its screen also lacks the lamination and anti-reflective coating of the other iPads, and it's not HDR-compatible.

Still, you're only likely to notice most of these if you place the tablets side by side. Images are natural and detailed, and the speakers are loud and dynamic. And it runs the same iOS as Apple's other tablets, giving it market-leading user-friendliness.

If you're on a tight budget, this is the tablet for you.