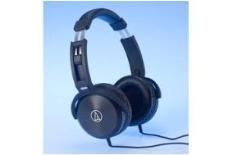 We're worried about the Audio-Technica ATH-WS70s before we even get them out of the box. Obviously the company's looking to attract the big-bass fans out there, and there's nothing wrong with that, but it's the terms printed on the packaging that concern us: ‘Solid Bass' sounds good, likewise ‘Extended Bass'. But ‘Overwhelming Bass'?

When is being overwhelmed ever a good thing, and why on Earth would a hi-fi company think it was a sensible term to use to describe the low frequencies of its new product?

A really big bottom end
Thing is, there's a lot of truth to all three statements: the bass is fairly solid, it does stretch impressively deep, and it's also rather overwhelming.

Play The Mother from The Road soundtrack, and the opening, bassy strings are tight and well-defined; but then the violins join in, and they're dragged down by the low-end, sounding fat and heavy when they should be light and agile.

The treble sticks out, too. Not because it's bad – it's actually rather sparkly and detailed – but because the lowering of the midrange leaves it isolated at the top, creating an overall delivery that's tonally gappy.

Designed for portable use
It's a shame really, because the Audio-Technicas have a lot going for them in other ways. For a start, they're probably the pair most deliberately designed for portable use, thanks to a stylish, closed-back design, short cable and very firm, but still comfortable, fit – they'll probably even stay on your noggin as you run for the bus.

They're sonically fairly dynamic, too, and capable of creating a nice sense of scale from big recordings like Metallica's live, orchestral version of Nothing Else Matters.

Unfortunately, none of that can make up for the unnaturally heavy, detail-short delivery.