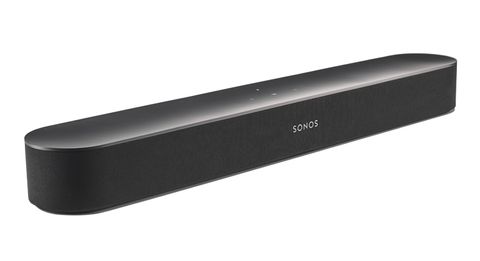 One of the best performance-per-pound products Sonos has produced, the Beam is a blinding little soundbar

Four years after the launch of the Playbar soundbar, a year after the Playbase soundbase and hot on the heels of the Sonos One smart speaker, arrived a brand new slice of Sonos hardware.

The Sonos Beam is a smaller, cheaper TV speaker, with a few additions to its spec sheet, including an HDMI connection and voice control assistant, initially Amazon Alexa, but also Google Assistant and Apple Siri.

Can the Beam deliver the goods? Or would you be better off saving some extra money and buying the bigger, newer, Dolby Atmos-enabled Sonos Arc?

At 65cm wide and weighing 2.8kg, the Sonos Beam is significantly smaller and lighter than the Playbar and new Sonos Arc.

Touch controls on top of the soundbar allow you to select volume up/down, previous/next track, play/pause and microphone mute, while an LED indicates the soundbar's status, mute status and voice feedback. Around the back you'll find the HDMI connection, ethernet port, power connection and a pairing button.

Available in black and white finishes, the Beam looks stylish but understated – and every bit the Sonos product. It’s even better looking than either the Playbar or Playbase, although the Arc probably now has the most convincing claim to the crown of best-looking Sonos product.

But the Beam is small, light and will fit easily into most living rooms – unlike Sonos’ other TV speakers, which require a lot more space. You can wall-mount the Sonos Beam, too, although the official bracket costs a fairly steep £59 ($59, AU$89).

Inside are four full-range drivers, one tweeter and three passive radiators, plus five class-D amplifiers. As on the Playbar and Playbase, the drivers and radiators are positioned along the front and the far edges of the bar, helping drive sound around your room for a more immersive, room-filling sound. Unlike the Dolby Atmos-enabled Arc, the Beam has no upward-firing drivers.

Voice control is taken care of by five far-field microphones, which ensure the Beam can hear you wherever you are in the room, even when the speaker is blaring out a movie or piece of music. If you’re concerned about privacy, you can turn the mics off entirely.

The Beam can best be described as a typical Sonos product (those who aren’t aware of what the company is about could read our complete guide to Sonos), which is high praise indeed, because it provides such an advantage for the Beam over its rivals.

This isn’t simply a soundbar: it's also a wireless, multi-room speaker that can play music from almost any source. Spotify, Tidal, Apple Music, Amazon, Google Play, Deezer, your phone, network-connected hard drives – it’s all supported and all can be combined in on-the-fly playlists and queues.

The Beam can talk to any other Sonos products you have in your home, playing the same music as the One in your kitchen or the Play:5 in your dining room.

Sonos also supports AirPlay 2, allowing you to build a multi-room system with products from different manufacturers. Of course, the Beam can also connect to your TV, and deal with TV and movie sound too.

While the Playbar and Playbase offer only a digital optical connection, the Beam (like the newer Arc) has HDMI (there's an optical adapter too). The sole purpose of the Beam’s one HDMI connection is to receive audio from the TV, using ARC (Audio Return Channel). There's no support for eARC as there is on the Sonos Arc, but because the Beam doesn't support Atmos, eARC isn't necessary.

If your TV was bought in the last few years, it should have an ARC-enabled HDMI socket, and the Sonos Beam will help you find it during the intuitive, app-based set-up (the Beam is compatible with the new Sonos S2 software).

Besides the neatness of the connection, the other advantage of using HDMI ARC is that it allows the Beam a certain amount of control over your TV, as long as it supports CEC (consumer electronics control). This means that, thanks to voice support on the Sonos Beam, you can turn on your TV and adjust the volume with voice commands.

MORE: Sonos Arc vs Beam vs Playbar vs Playbase: which is best?

Those looking for deeper voice control should consider adding a Fire TV device to their set-up. This enables more commands via the Sonos Beam, such as starting specific programmes on supported streaming services ("Alexa, play Stranger Things" will start the show on Netflix on the Fire TV, for example).

But just as Sonos wants to be platform neutral when it comes to music services, it also promises to support all available voice assistants, with Amazon Alexa and Google Assistant now on board.

Siri compatibility has also been available since launch, but its functionality has been stripped back compared to the integration on the HomePod. You can’t issue Siri commands to the Beam directly, instead you will need to use your iPhone as a microphone.

Much like the Playbar and Playbase, you can connect two smaller Sonos speakers (One, Play:1, Play:3, Play:5, or even the Ikea Symfonisk Bookshelf or Symfonisk Lamp speakers) to act as rear speakers in a cinema system, or add a Sonos Sub.

The former is worth considering if you’re after proper surround sound from a discreet system, but at an extra £699/$699, we’d say the Sub is overkill for the Beam.

Sonos hasn't upgraded the audio codecs it supports, so it's PCM stereo, Dolby Digital and Dolby Digital 5.1, with no support for DTS or lossless audio formats.

As already mentioned, there's also no Dolby Atmos support here – for that you'll need to spend extra on the bigger, newer (and also brilliant) Sonos Arc.

On the subject of sound formats, it’s important to ensure all of your sources are sending Dolby Digital signals to your TV, and that the TV can accept and send them to the Beam natively. Depending on the devices involved, this can be a fiddly process, but it’s worth making the effort as Dolby Digital signals result in a far better performance.

As is the norm for Sonos speakers, you will be prompted during installation to tune the Beam’s sound using the company’s Trueplay system, which uses your iPhone’s microphone to tailor the sound to your room and usual listening position (Android phones are still not supported).

While the Beam sounds better when ‘Trueplayed’, the difference isn’t as marked as with the company’s other speakers. At least this means you should get relatively close to the Beam’s best performances even without an iPhone.

Sonos's Loudness feature is also enabled by default, adding bass weight and scale that’s missing when you turn it off. Other modes include Night Mode and Speech Enhancement, both of which can be left off unless specific needs arise.

So, how does the Beam sound? Exceptionally good, particularly for its size. Sonos has managed to overcome two of the usual limitations of compact speakers: scale and weight.

Given the Beam’s dimensions, the width and spaciousness of the soundstage are astonishing. Play the opening of the 2017 remake of Ghost In The Shell and the sound effects of the gunfight fill the room in a way that confounds expectations.

Gunshots echo and ricochet far out to the left and right, and much further into the room than you’d expect.

Effects pan smoothly across the front of the room, and at the end of the scene a helicopter is heard in the far-right corner of the room with a weighty thrum before it eventually appears at the screen’s right edge. There’s a nice height to the delivery, too. It’s not just a wide soundstage, but a tall one. It really is impressive for the size.

Then there’s the weight. This scene has a deep, club-like bassline that the Beam has no right to reproduce with anything like the depth and authority it does. This is chunky, solid, grin-inducing bass. The Beam can go loud, too – few will ever complain that the Beam doesn't have enough volume.

And if football is your primary concern right now, you’ll be delighted to hear that the Beam does a superb job with the beautiful game, recreating the crowd noise in spacious, voluminous and atmospheric fashion, keeping commentary clear and making stadium announcements open and echoey, just as they should be.

Despite the weight and width on offer from the Beam, dialogue is clear and direct, and never drowned out by the rest of the action. If your TV’s own speakers lose clarity of dialogue, the Beam will see you right, even with Speech Enhancement switched off.

In fact, you might be blown away by the transformation. Suddenly you’re getting scale, dynamics, detail and punch and as close to the intended performance as you could expect from a £399 ($399, AU$599) speaker.

But it isn’t perfect – there’s a little treble brightness and sibilance is present, particularly at higher volumes or with poorly recorded audio.

We also had this issue with the Playbase (which suggests it’s a symptom of the way the company tunes its speakers), but it’s far less of a problem with the Beam. In fact, with decent content and everyday volumes, it’s barely noticeable.

And while the Beam is almost unbelievably spacious for its size, it doesn’t quite fool you into thinking you’re listening to a proper surround sound system. Effects stretch right across the front of the room, well beyond the dimensions of the screen but they don’t stretch up the sides of the room.

It’s a deep, spacious, atmospheric delivery, with echoes and reverb and three-dimensionality, but, unsurprisingly, it’s not surround sound. For that you’ll need to add a couple of Play:1s or pay the extra for the Arc, which is an upgrade on the Beam in every conceivable way, not least in terms of its room-filling ability.

The Beam is, though, about as musical as a dispersive soundbar can be. You sacrifice some directness due to the angling of the drivers but for a device designed first and foremost as an AV product, the Beam makes for a solid music system, with good tonal balance, bass weight, rhythm and punch.

MORE: 7 of the best Sonos accessories

Alexa and HDMI ARC are the Beam’s obvious talking points, but to focus on those features entirely would be to miss out on the fact that the Beam sounds rather exceptional for its price and size.

This is an affordable soundbar that most could find space for, and that could transform your listening experience. The width, depth and three-dimensionality of the presentation smashes expectations.

The Beam is more than enough speaker for most people, to the extent that spending the extra £400 ($400, AU$800) to get the Arc could, in many cases, be entirely unnecessary. Yes, the Arc is undeniably better, in almost every conceivable way, but the little Beam is a fabulous soundbar in its own right. For the average person in the average lounge, the Beam is a superb choice.

Which is the best Sonos speaker for you?