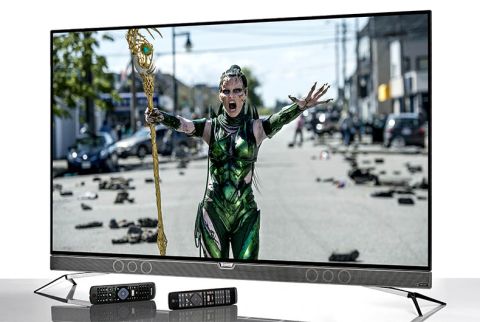 Not the king of picture subtlety or smart features, but a very decent first OLED effort from Philips

The Philips 55POS901F marks so many firsts, it might as well have graduated from an Oxbridge University.

Despite being officially launched at IFA 2016, it is Philips’ first model available in 2017, the first to use Android’s Marshmallow operating system and, most importantly, its first OLED TV – also the first with a super slim panel.

Finally following in LG and Panasonic’s footsteps, like Sony, Philips has picked 2016 to join the OLED race, now run by no less than five brands in the UK market.

Of course, that’s all alongside the now-prevalent 4K and multiple HDR technologies, ever-evolving smart functionality and the unwritten rule that any new TV must compete for thinness with the average envelope.

The Philips 55POS901F brings a fair few of those things to the table, including 4K, HDR and Android OS, as well as its own immersive Ambilight feature and an integrated 6.1 sound system. (The downside of having so many technologies is that consumer advice is as much about what a telly doesn’t have than what it does).

So let’s lay them on the table first…

Firstly, Philips looks to have well and truly killed off 3D by continuing to leave it off its TVs’ spec sheets. We doubt it’ll be a deal breaker, but that won’t necessarily be the case for the omission of UK on-demand catch-up apps.

While most rivals have all of the five available, the 55POS901F only has BBC iPlayer. As it stands, the Philips doesn’t support HDR content on Amazon Video either, although we’re told it’s coming via software update.

Uncertainty seems to be the state of play from Philips (and, to be fair, other brands) when it comes to choosing which of the four HDR formats to support.

While the already-available Sony VPL-VW550ES 4K projector, and new Panasonic and LG TVs, have support for Hybrid Log Gamma (HLG – the HDR broadcasting format formed by BBC and Japanese broadcaster NHK), the 55POS901F has left it on the shelf – for now.

Support of a third HDR format – Dolby Vision – is also up in the air. For now, the Philips’ HDR compatibility starts and ends with HDR10.

Adopted by the Blu-ray Disc Association for 4K Blu-rays, as well as Amazon and Netflix, it's the most prevalent format anyway.

The two apps sit at the heart of Philips’ 4K streaming and smart offering, which is handed to you by Android’s Marshmallow system.

It’s not the most up-to-date version (that’s Nougat) and we’ve never fancied Android as the most intuitive OS out there, but it has only become smoother and more comprehensive on the TV platform as versions have gone by.

The home menu is divided into distinctive sub sections, headed by recommended content such as ‘Top Movies from Google Play Movies’ and popular videos on YouTube, and followed by the ‘Philips Collection’ that includes its own app gallery, and the self-descriptive ‘Games’ and ‘Apps’.

There’s also full access to Google Play Music, Google Play Movies & TV and lastly Google Play Store, from which you can download anything from Spotify to a Tomb Raider game, as you would on a smartphone.

Storage can be expanded by 16GB with a USB stick too, which brings us to the final sub section: ‘Settings’, where you can connect to your network, change performance and fine-tune general system settings, and perform software updates.

There’s a search bar too for more direct discovery, joined by a largely unreliable (albeit entertaining) voice command function.

When it works, it works well; “Open Spotify” launches the app, and “horror movies” brings up genre films from Google Play Movies & TV store and trailers and relevant clips from Youtube – even a Spotify track from the Shaun of the Dead soundtrack.

But its accuracy is largely hit-and-miss, and adopting a robotic tone is often necessary to be understood. Call us old fashioned, but we’d stick to buttons.

There are two remotes included – traditional and smart. We prefer the latter with its QWERTY keyboard (useful for passwords) and touch-sensitive navigation button.

It’s a heavy wand to wave around for too long and the dense button layout takes some getting used to, but overall it does everything you’d want it to.

It’s the only bulky part of the Philips 55POS901F. The company’s ‘Visible Lightness’ and ‘European Craftsmanship’ design values translate in Layman’s terms to minimalism elegance.

The slim frame is half a finger-width at its thinnest, although five times thicker in the parts that accommodate the brains and power supply. Its brushed aluminium back panel, chrome curved edge, and near-zero bezel, warrant a place right at the heart of the best-looking living rooms.

Even the connectivity – comprising the likes of four HDCP 2.2-certified HDMI 2.0 inputs, three USBs, an Ethernet port and optical output – is neatly hidden away under a removable panel. The three-sided Ambilight LEDs on the back panel are subtle, and the ruler-thick soundbar running underneath the telly screen is seamlessly integrated.

Our only criticism is about the positioning of the two feet either end of the screen. Unless wall-mounted, it has to sit on a platform at least 120cm wide. That’s two normal-sized AV racks, and impractical, to say the least.

Philips has hoped to make the most of the OLED panel with its Perfect Pixel Ultra HD, Perfect Colour, Perfect Contrast and Perfect Natural Motion processing engines.

So is the narcissism justified? To some extent, yes; this is probably the best picture performance we’ve seen from a Philips TV.

While the 55POS901F only just meets the minimum 540-nit peak brightness of UHD Premium standard, which may seem paltry considering Samsung claims its 2017 QLEDs could reach 2000nits, it only takes an open well-lit refrigerator and a few neon lights inside a bar in Netflix’s Santa Clarita Diet (in 4K and HDR) to convince us.

Even when we fully turn on our test room’s lights, which make the room brighter than a typical living room environment, outdoor scenes still look impressively radiant.

The HDR layer makes itself known in both the vibrancy and subtlety of colours; the opening shot of the lush Californian hills are enthusiastically hued, as are the pools of blood that stain garden lawns. Different intensities of sunlight on the bed duvet are noticeable, and freshly-washed cars glint in the sun.

The emergence of the white-on-black closing credits not only tells us it’s time to switch to an Ultra HD Blu-ray, but also flags the Philips’ startling contrast. The black levels associated with OLED technology materialise, and the text leaps out like a north star against a night sky.

The true benefit of such impressive contrast is even clearer in superhero ‘love story’ Deadpool on 4K Blu-ray as fire blazes vividly, rising above the pitch-black bars merely pixels away.

The Philips proves a good vehicle for highlighting the superior sharpness and detail of 4K Blu-ray too.

It comes to your attention that varying fabrics make up Deadpool’s costume, and objects in the background still hold fine details. Once ‘Perfect Natural Motion’ is applied (on minimum, we’d advise), action is super smooth and free of any distracting blur.

However, no matter the extent of our fiddling with contrast settings (we’d also turn ‘Perfect Contrast’ on to minimum), it can’t quite reach satisfyingly deep blacks without losing some insight. Blacks too easily bleed into one another, and the detail in dimly-lit scenes can get lost in shadows.

Deadpool’s red spandex suit is deep and varied, and everything from the yellow cranes to scrap metal is infused with rich yet nuanced colour, but there’s a sense that colour subtleties are overlooked too.

What’s exclusive to the Philips TV experience, however, is Ambilight, which creates a multi-coloured halo behind the TV by radiating lights from its sides for a more immersive viewing experience.

It’s effective; the light extension somehow making the screen seem bigger, and perhaps softening the blow that there’s no 65in version of this Philips yet.

The lights can be set to a fixed colour, from burnt orange (‘hot lava’) to lush green (‘fresh nature’), or mirror the dynamics of what you’re watching – a series of lights emulating the picture’s colour palette flashes in relation to the on-screen movement.

We play Avelino’s Energy and the ‘follow audio’ mode makes a good substitute for a disco ball. You can change the brightness and saturation for a mellower ‘background’ performance.

Next up is our first spin of South Korean zombie flick Train to Busan ahead of its Blu-ray release, and it proves there’s life not only in the film genre but also in the Philips’ HD performance too.

There’s the expected drop in resolution and detail, but the bold, confident character remains consistent.

There’s enough detail to capture the gleam of sweat on passengers’ faces, and in close-ups for you to be impressed by the make-up and SFX.

Even broadcast channels in SD are perfectly watchable, if a little gaudy – especially as Tipping Point’s purple staging comes into frame.

Thanks to the Philips’ six-speaker soundbar and backfiring Triple Ring speaker with integrated bass port, the familiar catchphrases of Tipping Point host Ben Shephard are just as bold.

In the past, Philips has considered sound more seriously than many of its rivals, even in sets as small as 24in, and in this respect, the 55POS901F is another success.

While no substitute for a decent external soundbar like the Q Acoustics Media 4 (£330), it has the clarity, weight and volume to be deemed a good make-do option if you don’t want to spend extra straight away.

The Philips 55POS901F doesn’t quite embrace all that the TV world has to offer today, but as there’s so many scores to settle on the content side, we doubt many of the upcoming models this year will do either.