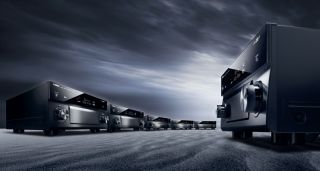 Yamaha has taken the wraps off a new range of home cinema amplifiers. Called the Aventage range, every product in it supports both Dolby Atmos and DTS:X audio technologies, which should make your films and TV shows sound better than ever.

Dolby Atmos and its rival DTS:X technologies aim to make surround sound more immersive and realistic. Dolby Atmos started life in cinemas, and has since come to home cinema products, while DTS:X has gone the other way, from homes to multiplexes.

You can find out more about each by clicking the links above.

Aventage products also feature Yamaha's own CinemaDSP processing, which makes use of all the speakers in your set-up, regardless of which audio format you're using. Products from the RX-A1070 and above also have Enhanced CinemaDSP, which boosts Dolby Atmos and DTS:X audio by increasing precision and spatial representation of the sound field.

They all support Dolby Vision too, as well as standard HDR. Support for Hybrid Log Gamma will come via a firmware update later in the year.

Yamaha's Scene technology also comes as standard. This lets you store your volume, favourite inputs and other preferences as presets, and now you can store your favourite radio stations or an album from your NAS drive, too.

DAB and DAB+ are onboard every amp, as is Yamaha's MusicCast streaming feature. Each model is compatible with Spotify and Qobuz, with Tidal and Deezer support coming via a firmware upgrade later this year. MusicCast supports hi-res music files up to 24-bit/192kHz in WAV, FLAC and AIFF, 24-bit/96kHz in ALAC, and up to 5.6MHz DSD files.