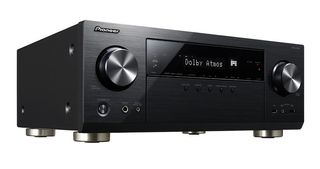 Pioneer has announced three new AV receivers, and they all support both Dolby Atmos and its rival DTS:X.

The VSX-LX302 is the biggest of the trio. It's a 7.2-channel receiver, delivers 170W per channel and can drive two subwoofers at once. It also boasts a new feature called Reflex Optimiser, which eliminates the phase-lag issues that plague some Dolby Atmos elevation speakers, resulting in clearer mids and highs.

It supports music streaming services Tidal, Spotify, TuneIn and Deezer. And it's no slouch on the video front either. It supports 4K/60p/4:4:4/24-bit video signal transmission with HDCP 2.2, along with support for HDR (HDR10, Dolby Vision and BT.2020).

There are a generous six HDMI inputs and two HDMI outputs, making it the nerve centre of your home entertainment set-up.

Bluetooth, Apple AirPlay and wi-fi come as standard, as does Chromecast built-in. It also supports hi-res music files (including DSD 2.8MHz/5.6MHz) and Dolby TrueHD (up to 24-bit/192kHz). Inside is an AKM DAC, and a moving magnet phono stage for vinyl playback. There's even a trusty old FM/AM radio, with a DAB-enabled dongle launching later this year.

The VSX-932 is a similar 7.2-channel receiver, but has less power (130W per channel). It only has four HDMI inputs and one HDMI output, can only power one subwoofer, and has a slightly less advanced DAC.

Meanwhile, the VSX-832is a 5.1-channel AVR. It outputs at 130W per channel, and doesn't have a phono input for playing vinyl.