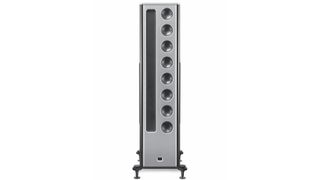 The front baffle is machined from solid aluminium, and within it is housed an electrostatic treble unit plus a total of eight midrange and bass drivers. Multi-layer laminated wood panels are used for the cabinet walls and internal cavities, of varying densities, to increase the rigidity of the cabinet.

A carbon finish for the sides and back involves multiple applications of priming lacquer which are sanded between coats. Carbon fabric is laminated to the surfaces under high pressure and sealed several times with a special lacquer before the final coat is applied and hand polished for a luxury finish.

To keep vibrations to a minimum, each speaker sits on a solid aluminium baseplate fitted with heavy-duty spikes.