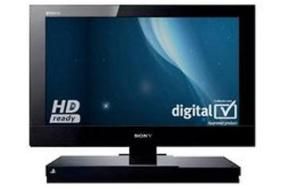 This means that not only can you play back CDs and DVDs through the telly, you can also play any old PS2 games you might have still lying around.

Sony's S-Force sound system gives sonics a boost, and Clear Voice does what it's name suggests.

You can connect to the internet using one of the two onboard Ethernet sockets (or via an optional wi-fi dongle), taking advantage of Sony's Bravia internet service to watch YouTube, BBC iPlayer, LoveFilm and the like.