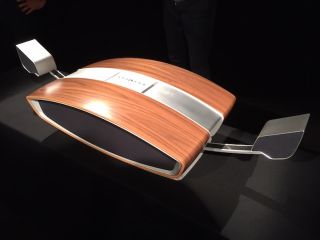 Wireless multi-room systems aren’t exactly new these days, but we bet you’ve never seen one quite like this, the Sonus Faber SF16.

The concept is derived from the original Sonus Faber ‘snail’ speaker system and wraps one front- and one rear-firing 5in bass driver in a wooden/aluminium cabinet, while the two extending satellite speakers house the tweeters and midrange drivers in a bipole/dipole arrangement.

Power is provided by Class D amplification, delivering a claimed 1400W in total.

Sources can be connected using the optical or coaxial digital inputs, or the analogue RCA ones. But most users will probably want to stream music from their laptop, smartphone or tablet, so for that there’s DTS Play-Fi which works over any wi-fi network. DLNA compatibility is included too.

Supported file formats are MP3, M4A, AAC, FLAC and WAV, and the system can handle hi-res audio up to 24-bit/192kHz. Up to eight Sonus Faber SF16s can be connected to create a wireless multi-room system.

Tidal, Deezer, Spotify and Amazon Music are all on board. Qobuz and Napster support is expected to follow later.

Paolo Tazzon, Sonus Faber’s head of R&D, says: “It was a huge challenge to create this crazy concept, as initially I saw a lot of technical problems we had to solve. The real challenge was to keep all the basic qualities of traditional hi-fi, but reduce the complexity for the consumer.”

Great design had to be combined with great sound, says Tazzon, and yet the SF16 had to be a simple ‘plug and play’ system.

To connect wirelessly to the SF16, owners simply download the iOS or Android Play-Fi app, which is coming to Windows soon.

Sonus Faber says it will only make 200 SF16s per year, with the first ones being available in September, priced around £9900.