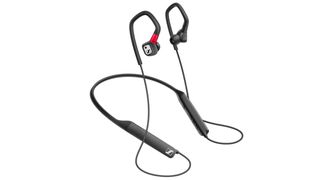 Sennheiser is no stranger to high-end headphones. After all, the German brand has produced several pairs costing thousands of pounds (including the £37,500 Sennheiser Orpheus) over the years. Such sumptuosity has been embraced not only by its over-ears designs but also its earbuds, such as the Award-winning, once-£600 Sennheiser IE 800s.

Described by Sennheiser as its “first audiophile Bluetooth In-Ear headphones” and based on the wired IE 80s, the neckband-style IE 80S BTs make good on their high-end promise by supporting hi-res Bluetooth codecs such as LHDC and aptX HD, as well as AAC. They’re also compatible with aptX Low Latency, which claims to offer perfect synchronization when it comes to video playback.

A “top-of-the-line” AKM DAC and “powerful” neodymium magnets back its case when it comes to performance, as do its on-unit bass adjustment and the five-band equalizer found within the Sennheiser Smart Control App.

Siri and Google Assistant voice control can be initiated via the three-button remote, and Sennheiser has worked on its microphones to ensure clearer capture of voices and during calls and voice assistant communication.

The Bluetooth neckband can be detached to allow for wired listening through a traditional cable, too. Also supplied is a carry case as well as silicone, lamellar and Comply Memory Foam tips in a choice of three sizes.

We weren't huge fans of their wired siblings when we reviewed them last summer, calling them out for their lack of excitement and dynamic punch, so it goes without saying we hope the IE 80S BTs have what it takes to justify their not-insignificant £439 price tag.