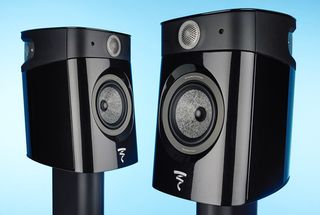 As Monday morning rumours go, this is an intriguing one: Reuters has picked up on a story - hotly denied - in South Korea's Financial News that Samsung is in advanced talks to take over French speaker company Focal in a deal said to be worth up to 300 billion won (£220m).

Reuters reports that talks between the two companies are believed to be "in the final stages", and Samsung hopes to complete the acquisition by the end of this year.

Samsung has flatly denied the rumour, telling Reuters: "The report from Financial News on the acquisition of the French audio equipment maker, Focal, is not true." We contacted Samsung and Focal for further comment.

A spokesperson for Samsung UK told What Hi-Fi?: "We don't comment on rumour or speculation." A day later we received a second statement: "The report on the acquisition of the French audio equipment maker, Focal, is not true."

And a similar statement was issued to us by Focal: ""We can confirm that Focal has not discussed with Samsung a potential investment, and will not make any further comment on speculation or rumours."

The speculation comes at a tricky time for Samsung, which is battling the damage done to its reputation by the problems with its Galaxy Note 7 smartphone, which was withdrawn from sale when some of the devices exploded and caught fire.

Any move to acquire Focal would have significant implications for the audio industry, as Focal merged with Naim Audio in 2011 to create a pan-European hi-fi business with a combined turnover of more than £48m.

The merged company, Focal & Co, owns and manages Focal and Naim as independent brands, retaining their own philosophies and product ranges, but collaborating on research and development.