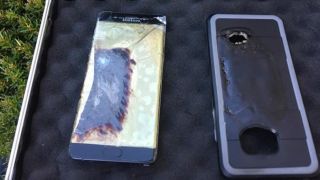 "This is the way the world ends, not with a bang but a whimper", said T. S. Elliot. For Samsung, however, a notable series of bangs has now stopped production of the Galaxy Note 7 smartphone.

"We recently readjusted the production volume for thorough investigation and quality control, but putting consumer safety as top priority, we have reached a final decision to halt production of Galaxy Note 7s," Samsung said in a statement on Tuesday.

Previously the company had said it was investigating the issue, and advised existing owners to turn the phone off and return it, while also halting sales.

"Because consumers' safety remains our top priority, Samsung will ask all carrier and retail partners globally to stop sales and exchanges of the Galaxy Note 7 while the investigation is taking place," the company said in a statement.

"Consumers with either an original Galaxy Note 7 or replacement Galaxy Note 7 device should power down and stop using the device and take advantage of the remedies available," it added.

This news comes after Michael Klering, a Kentucky resident whose replacement Note 7 caught fire, accidentally received a text message from a Samsung representative not intended for him, according to WKYT.

The message read, "I can try and slow him down if we think it will matter, or we just let him do what he keeps threatening to do and see if he does it".

It now seems it's the end of the road for the Note 7.