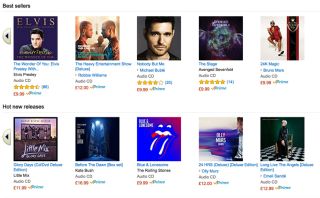 It turns out that CD you bought on Amazon may not be the real deal - even if your order has been "fulfilled by Amazon" or even featured in Amazon's "buy box".

The music industry claims pirated CDs are once again an increasing problem, with research carried out by the Recording Industry Association of America (RIAA) revealing that around 22 per cent of CDs that the industry body ordered from Amazon were fake.

The RIAA ordered 194 CDs and found 44 to be counterfeit. 'Greatest hits' albums appeared to be a hot spot, with 28 of 36 of these releases turning out to be fake. There's no word on how the ordered CDs were chosen.

One major record company blamed fake CDs for a 17 per cent drop in sales on Amazon, despite CD sales across the rest of the market remaining flat.

While CDs may be seen as something of a relic for many music fans, CD sales still accounted for around 40 per cent of global music industry revenues last year. CD-buyers increasingly shop online, which is said to play into the hands of counterfeiters.

The Wall Street Journal reports that pirated CDs are increasingly difficult to tell apart from the real deal, and often cost almost as much as the genuine release, ensuring wary punters aren't put off by a "too good to be true" price.

The American Association of Independent Music claims the pirated albums can be available within weeks of a new release going on sale. The items are usually traced back to China, though sellers are able to mask their location to customers.

Amazon told the WSJ it had “zero tolerance for the sale of counterfeits" and it's "working closely with labels and distributors to identify offenders, and remove fraudulent items from our catalogue. We are also taking action and aggressively pursuing bad actors.”

Despite the recent vinyl resurgence, vinyl sales were still dwarfed by CD sales in 2015. But whether the CD you buy is genuine, and the money goes to the artists and labels, seems to be not quite so clear.