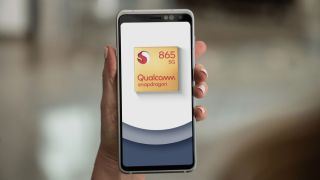 Qualcomm's latest, 5G-capable phone platform, Snapdragon 865, is barely three months old and yet, according to the chip maker, it has already been snapped up by several device manufacturers for their forthcoming handsets.

Qualcomm claims that more than 70 flagship designs based on the Snapdragon 865 platform are coming – including models already confirmed (such as the Samsung Galaxy S20s, Sony Xperia 1 II and Xiaomi Mi 10) as well as yet-unannounced devices like the ZenFone 7 and ROG Phone 3.

Qualcomm's 5G-centric platform also boasts several other camera upgrades, including 4K video capture at 120fps, the ability to shoot 200MP photos plus slow-motion video capture at 960fps. And then there's the promise of faster data processing to juggle all those pixels too.

What this essentially tells us is that by the end of the year we can expect to see a smartphone market much more dominated by 5G handsets than it is today. Its adoption shouldn't be dogged by concerns over 5G transmission being dangerous to humans, either. UK regulator Ofcom has just carried out tests of the country's 16 5G-enabled base stations and found that their radiation levels are well within safety guidelines.