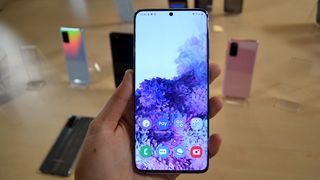 The smartphone world can rarely keep a secret. We have known (or at least strongly suspected) many details of Samsung’s next generation of Galaxy phones for weeks ahead of the official announcement. Tonight, at its annual Galaxy Unpacked event, the Korean giant has finally put rumours and leaks to bed by revealing the S20, S20+ and S20 Ultra.

The three-strong line-up, which the company says is the ‘first step in a new vision’ for Samsung Galaxy handsets, are all 5G phones with headline-grabbing camera tech.

All three sport Quad HD+ Infinity-O screens which support HDR10+, as well as 120Hz refresh rates that make it twice as responsive as predecessor – good news for gamers.

The S20 Ultra, which heads up the trio, packs a 6.9in display while the S20 and S20+ come in at 6.2in and 6.7in respectively. That shifts up the screen real estate on this year's phones compared to last year's S10 models, which vary between 5.8in and 6.7in.

You can already read our Samsung Galaxy S20 Ultra review (hands-on) for our first impressions on the flagship phone.

The S20 Ultra packs some mighty camera hardware: the quad rear camera arrangement comprises a 12MP ultra-wide angle lens, a (ludicrous!) 108MP wide-angle lens, 48MP telephoto lens and a DepthVision lens – and is capable of 100x zoom. Up front is a 40MP snapper.

Meanwhile, the S20+ has a quad rear snapper that combines 12MP ultra-wide angle and wide-angle lenses with a 64MP telephoto lens and a DepthVision lens. The S20 mirrors that configuration but forgoes the DepthVision. They both feature 10MP front cameras.

8K recording is present across the board – up from the S10's 4K capabilities – along with the 8K Video Snap feature which allows the user to capture 33MP photos from the video.

And there's a neat new feature called Single Take where the handset's AI uses each camera in the quad-array to pick out all the moments of interest you capture. So, if, for example, you take a short video you will be presented with a small collection of the best clips and photos within it for you to pick from and use.

Samsung has also supposedly improved motion performance thanks to hardware and AI enhancements, and the Hyperlapse night mode has been developed for improved night capture.

Away from cameras, the S20s are powered by 64-bit octa-core processors. They stick with USB-C sockets over 3.5mm headphone jacks, as expected, and have fingerprint scanners.