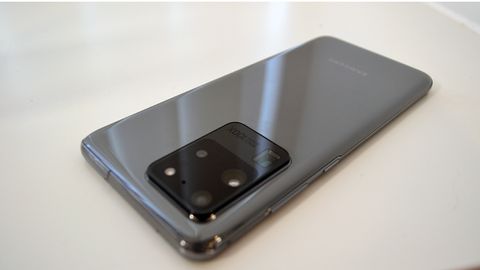 If, like us, you have been following the Galaxy S20 phone leaks in the past weeks, Samsung’s official unveiling of the S20, S20+ and S20 Ultra handsets and their specs this evening won’t have come as much of a shock.

But while there was little element of surprise to the S20 line-up, there’s no denying how impressive their confirmed features are – especially those of the flagship Galaxy S20 Ultra.

We’ve been pre-briefed and hands-on with the top-tier Galaxy handset for 2020, and here are our first impressions...

The Galaxy S20 series in short

The S20 Ultra heads up the just-announced Galaxy S20 series, which also comprises the Galaxy S20 and Galaxy S20+, and marks the first time an entire Galaxy line-up supports the superfast 5G network, following the introduction of Samsung’s first 5G-enabled phone, the S10+ 5G, last May and the second, the Note10+ 5G, in August.

Naturally for a flagship, it boasts the most advanced features (discussed in more depth below) of the three new arrivals, including a quad-camera system that comprises a 108MP lens and is capable of 100x zoom, a whopping 5000mAh battery, a 6.9in, 120Hz screen, and a maximum 16GB RAM option. That’s an improvement on its predecessor, last year’s S10+, in every aspect.

Camera: *how* many megapixels?

As with any compelling headline, it’s hard to look past the S20 Ultra’s standout feature, the camera. The quad-camera system moves things past the S10+’s triple-camera arrangement with a preposterous 108MP wide-angle lens accompanied by a 12MP ultra-wide angle lens, 48MP telephoto lens and a DepthVision lens. And while we’re on impressive figures, the camera is capable of a 100x zoom.

Zoom in to that maximum using the camera’s viewfinder (you can scroll along the zoom bar parameters to do this rather than pinch the screen) and while there’s a fair amount of noise and instability in the viewfinder, AI comes into play as a photo is captured to help smooth the outlines and create more definition.

It works pretty well – once the phone is stable on a tripod, we zoom into two small figurines in the distance and while the magnified result is hardly what you'd call crisp, you can make out its features. It’s hard to imagine many scenarios in which this quality will suffice, but the results yielded by its lower zoom increments – 40x and 60x, for example – will no doubt pass the test for most snappers taking close-in shots (and are above what the S20 and S20+ are capable of with their 30x maximum zoom).

For selfie fans, the front snapper – just the one lens this time – is a remarkable 40MP (compared to its predecessor’s and siblings’ 10MP), and video can be recorded not only in 4K, as it can on the S10+, but also in 8K… just in time for your next 8K TV purchase, natch. With the 8K Video Snap feature, users can capture 33MP stills from 8K videos too. Neat.

The S20 Ultra’s camera uses new image sensor tech called nona-binning, which combines the electric charge from nine pixels into one ‘super pixel’, for brighter and clearer results with less noise. Samsung says it can capture three times more light than ever before. We didn’t have a S10+ on hand for comparison, but the snaps we took in the colourful pre-briefing space were typical for Samsung phones – superbly bright, clean and vivid. We wouldn’t be surprised if a new benchmark was set here.

A bigger image sensor, too, has supposedly allowed Samsung to improve nighttime capture with its new Hyperlapse Night mode, although considering our briefing was held in a bright office space one afternoon we are yet to experience it.

One of the more practical camera modes introduced in the S20 handsets is Single Take, which uses the camera alongside AI to pick out, and create a portfolio of, all the best moments you capture in one shot. We took a short video of a Samsung representative waving ribbon around (for demo purposes, of course) and in the gallery, the phone presented a collection of the best stills and shorter clips that, Samsung says, makes it easier to pick favourites and upload them to Instagram.

The S20 Ultra’s name is fully justified by the size of its massive screen. At 6.9in, it’s slightly bigger than the Note 10+’s 6.8in display (although we’ll avoid referring to it as a Device-Type-That-Must-Not-Be-Named).

But while it’s the biggest among the S20 trio, they all sport the same QHD+ AMOLED Infinity-O screen, which continues the HDR10+ support introduced by its predecessors. The stand-out feature here is its 120Hz refresh rate and 240Hz touch sensor, making it twice as responsive as the displays on the S10s – great news for gamers. It looks fantastic: detailed, lucid and colourful. But then that’s been the case with the past few Galaxy S iterations.

At the time of reviewing the S10+, we noted: “There is a little more insight on the iPhone [XS Max], but the Galaxy S10+ undoubtedly delivers good video, not least when fed 4K or HDR content.” Will the S20 Ultra have what it takes to outshine the iPhone 11 Pro’s class-leading display?

As expected, the S20s stick with USB-C sockets for audio (and charging) over 3.5mm headphone jacks. As for new audio features, there’s Music Share, which lets owners set their Galaxy S20 Ultra as the main device through which others can connect to play their music too. Unsurprisingly the S10 and Note 10 series’ in-display Ultrasonic Fingerprint scanner (which has got better – and safer – in recent months) and face recognition unlock tool return too.

Last, but certainly not least, the S20 Ultra packs one of the biggest batteries around, its hefty 5000mAh juice pack trouncing the Galaxy S10 5G (4400mAh), Galaxy Note 10+ (4300mAh) and iPhone 11 Pro Max (3969mAh), and coming in level with the Moto G7 Power. Samsung says the wireless charging speeds are faster over the Galaxy S10 models, thanks to Fast Wireless Charging 2.0, too.

One of the things that struck us about the Galaxy S20 when we first held it in our hands was how light it felt. Considering the camera hardware and battery inside the S20 Ultra’s chassis, the flagship feels pretty lightweight too.

Its size won’t suit all – our thumb couldn't reach the top of the screen when held in the natural position – and we aren’t huge fans of the mirror finish which requires you to wipe it every few minutes. It's a shame the camera bump protrudes so noticeably from the glass rear panel too, though when the handset is fitted with a case, it sits flush against it.

But that doesn't change the fact that the slim, finely cut chassis is undoubtedly one of the sleekest, most attractive around. That's partly thanks to the Edge design curving the screen gently around the frame to eliminate any bezel, but also the notch-less screen, thanks to the in-display scanner and discreet front camera.

The Samsung Galaxy S20 Ultra comes in 12GB or 16GB RAM variants, with either 128GB or 512GB storage options that can be expanded by a microSD card up to 1TB.

So should the S20 Ultra be your next phone, Android fans? Its camera wizardry, gorgeous screen and 5G support alone combine to make a handset worthy of 2020. The Galaxy S flagships have been excellent – and often our favourite – Android phones in recent years, and this latest one doesn't look likely to buck that trend.