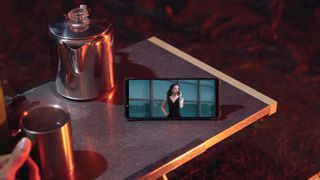 Mobile World Congress may have been cancelled, but that hasn't stopped Sony showing off its newest phone this week. The Sony Xperia 1 II (because Xperia 2 would be too straightforward it seems) is built for movies on the move, with a 21:9 screen and Dolby Atmos audio support.

It also has some neat software to improve the AV experience too, such as motion blur technology that Sony says creates the equivalent of a 90Hz screen (although that's still less than the 120Hz on the recent Samsung Galaxy S20). Sony TVs have the best motion processing in the business, so we don't doubt it can translate that to the mobile experience.

Sony claims the handset has been tuned in collaboration with its music and movie arms – Sony Music Entertainment and Sony Pictures Entertainment, respectively. It's also the world's first phone with 360 Reality Audio hardware decoding to optimise the experience on Tidal.

Sony claims crosstalk has been reduced to 20dB, which it says is an "imperceptible" level. It's also more than 90 percent lower than through USB-C headphones.

Hi-res file support and hi-res wireless audio transmission come as standard, as does DSEE Ultimate. This uses AI to automatically improve the audio frequency and bit rate in real time, designed so that every track sounds as close to hi-res audio as possible. It's basically upscaling for audio and is available through wired or wireless headphones while listening to either local or streamed music.

It even keeps the 3.5mm jack for connecting a standard pair of wired headphones.

The 6.5-inch 21:9 screen is very tall – just like its predecessor, the Xperia 1. A lot of films are shot in this aspect ratio, so you can watch them natively on the new Sony phone without any black bars or cropping.

Away from the AV side of things, the Xperia 1 II has some serious camera credibility. Its snapper has been made in collaboration with camera company Zeiss, with its lightning-quick auto-focus a particular highlight – handy if you're shooting fast-moving subjects.

Low-light snaps have been improved, and you can even use the handset as a remote control for a DSLR. You can capture movies in high-resolution too: either in 2K at 120fps, or 4K at 24/25/30/60fps.

It charges wirelessly, so no need to plug it in, and the 4000mAh battery looks good to last all day. Oh and it's 5G too, for a superfast connection where you can get coverage.