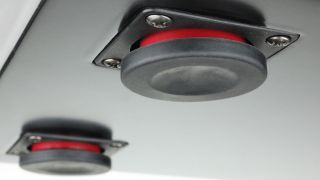 PSB Speakers and acoustic isolation specialists IsoAcoustics have today announced they are joining forces for a new line of speakers.

The Canadian companies will collaboratively produce a number of PSB speakers integrated with IsoAcoustic isolation technology, the first of which will be the PSB CustomSound In-Room Sub (CSIR Sub). It will be revealed at ISE (Integrated Systems Europe) 2020 in Amsterdam next month.

An alternative to traditional mass and floor spike techniques used to control the connection between speakers and the floor/stand (or other supporting surface) they sit on, IsoAcoustic’s patented isolators connect both to the base of the speaker and to the supporting surface so that the energy is effectively managed by the internal isolators. The isolators work to reduce the transfer of resonant energy from the speaker to the floor/stand, preventing it from reflecting back up to the speaker and detrimentally affecting the sound.

The directional isolators, which are aligned with the speaker’s drivers to provide greater sound clarity and focus, are “a natural fit for PSB Speakers”.

The relationship between the founders of PSB Speakers and IsoAcoustics, Paul Barton and David Morrison respectively, go way back. They first met in the ‘80s in Morrison’s workplace, the Canadian Broadcasting Corporation (CBC), when the TV and radio broadcasting company chose to use Barton’s Passif II speakers in its studios. Inspired by Barton’s expertise and methodology of measuring sound, Morrison worked on design concepts and tested them over the following years, ultimately founding IsoAcoustics.

“What Dave has done with IsoAcoustics is really a Canadian audio success story and we’re proud to be able to collaborate with them,” says Paul Barton, founder of PSB Speakers. “In the end, we don’t have a lot of control over a consumer’s listening environment, so knowing that IsoAcoustics’ products will be integrated into a number of our upcoming products gives me confidence that our speakers are optimized to our consumers’ expectations of quality,” says Barton.

Bristol Hi-Fi Show 2020: all the details and what to expect