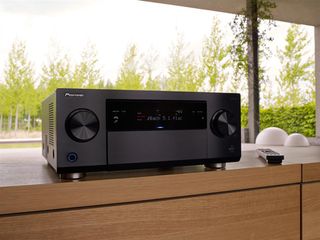 Pioneer has announced a five-strong range of AV receivers, with three set to support Dolby Atmos sound technology via a firmware update later in the summer.

The top-of-the-range SC-LX88 features nine channels, capable of generating 260 watts per channel. Meanwhile, the SC-LX78 and SC-LX58 models also feature a 9-channel design, but instead produce 250 watts and 240 watts per channel respectively.

The SC-LX models will be enabled for Dolby Atmos in the home via a firmware update that will arrive later in the summer, aiming to "give users access to an immersive sound experience".

A range of streaming options are available with all five new models. They're all DLNA certified and feature a network connection port and a wireless LAN converter. Services such as vTuner, Spotify Connect, HTC Connect and MHL for Android are also supported.

All models are fitted with the Sabre DAC stage and DIrect Energy HD amplifier modules. DSD, WAV, FLAC, AIFF and ALAC files are all supported as well as multichannel FLAC/WAV 5.0 and 5.1 24-bit/96kHz.

Pioneer's iControlAV5 app is also supported by the new receivers and is available for free from the Google Play Store and Apple App Store.