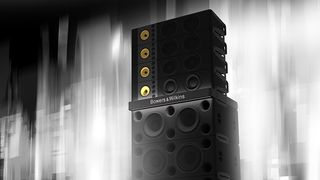 Earlier this year came the news the Indulgence Show – which in 2016 and 2017 showcased high-end hi-fi, home cinema and general lifestyle technology in the capital – was to rebrand as ‘Festival of Sound: The Music and Audio Show’ for 2018.

And with the new name came a new promise: a greater focus on music, with live musical acts (and some renowned artists) ‘in abundance’, alongside its usual brand-spanning celebration of hi-fi, headphones and portable audio.

The three-day festival takes place from today, Friday 28th, until Sunday 30th September at Novotel London West in Hammersmith, London, and looks set to live up to that promise.

So, what's on the programme? Well, we can expect the debut London appearance of Bowers & Wilkins’ Sound System, for one.

The one-of-a-kind four-way active loudspeaker array comprises four 3.2m-tall stacks capable of an ear-ringing 120dB, and has been touring summer festivals at the disposal of some of the world’s best DJs since its worldwide debut at Primavera Sound in 2014.

The Sound System will be utilised at the Novotel’s 1,000-capacity Chablis Suite by the likes of Chris Difford (founding member of Squeeze), twice Grammy-nominated sing-songwriter Beth Nielsen Chapman, UNKLE co-founder James Lavelle with Philip Sheppard, and JJ Jeczalik and Gary Langan (co-founders of Art of Noise).

The Festival of Sound: The Music and Audio Show has also announced some other gigs and musical events.

On the afternoon of Friday 28th, the stage will host Unsung Singers - a UK backing vocal supergroup that includes singers such as Gina Foster and Tessa Niles, who have sung behind the likes of David Bowie, Stevie Wonder and Tina Turner. They will be joined by musical director Mike Moran, known for his work with Queen, Ozzy Osbourne and George Harrison.

And on the evening of Saturday 29th, Beth Nielsen Chapman will showcase her latest album Hearts of Glass, as well as previous albums and numbers she has written for other artists including Willie Nelson, Bette Midler, Elton John and Neil Diamond.

Those counting down to the October theatrical release of the movie Bohemian Rhapsody will no doubt be pleased to hear, producer and musician Gary Langan (who was assistant engineer when the eponymous track was recorded) will be present – armed with 24-track masters from the studio – to offer behind-the-scenes access into his experience of working on the overwrought classic.

And last but not least, music producer Chris Kimsey will be offering Marillion fans insight into the creation of the band’s fourth, landmark album Clutching at Straws, as part of ‘The Inside Track’ music seminar series running throughout the weekend.

Lest we forget, there will be any number of hi-fi and home cinema brands at the show, too, showcasing their latest and greatest products. Confirmed brands include Audiolab, Bowers & Wilkins, Bryston, Cabasse, Chord Company, Denon, Focal, KEF, Moon, Naim, PMC, ProAc, Wharfedale, Wilson Benesch and many more.

Also among them will be Marantz, who is giving 60 people the chance to win free tickets to the show and an exclusive demonstration of its KI Ruby CD/SACD player and integrated amplifier that were announced back in June.

Naturally, Focal will also be showing off its recently announced Kanta No.3 and Kanta No.1 speakers, while Naim will be displaying its newest range of network streamers and the latest products from Naim’s Uniti range.

You can find out all the information and buy tickets on the Festival of Sound website.